In this article we cover a new trend taking off in online market places like Amazon, where Americans are switching from their central AC to new products like mini split AC units to cut energy costs this summer and still stay cool, as provided by RolliCool, the leading providers in the current market. 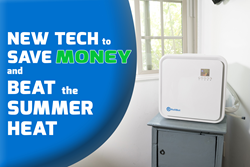 Save money this summer and stay cool

Amazon has seen a huge boost in product movement, with hundreds of these units selling per day

This year we are seeing a rapid upward climb in temperature. Experts at the National Weather Service reported recently that the June climate was “among the highest” yet recorded with locations such as Death Valley hitting 120°F. With the increase in summer heat is a spike in electric bills due to the excessive rise in air condition usage.

Parallel to this trend is an upward scale in sales for smaller AC systems, such as the mini Split AC units, which have risen in recent popularity. Amazon has seen a huge boost in product movement, with hundreds of these units selling per day. This specific market has boomed due to the distinguishing difference from their “central” cooling counterparts: their ability to regulate the temperature in a single room, rather than the entire residence.

The science behind the Split Air Conditioner...
This unique ability is possible due to a refrigerant gas supplied into the unit’s compressor. Once there, the gas is pressurized and condensed through a series of tubes into a liquid form. This is then ushered through the expansion joint where it is again converted into a gas as pressure is reduced. This gas releases an abundance of heat, thus becoming colder. From there, it is fed back into the compressor for a second round there it will repeat this process until it is the ideal temperature according to the unit’s thermostat.

Why Ductless over Central AC?
This dynamic cooling system is also known as a "ductless mini-split" air conditioner, called so due to their lack of long tracts of sheet metal tunnels (or “ducts”). Their singular design helps the split unit sidestep expending massive amounts of energy while running - meaning users’ electric bills are drastically lower each month on average than those who use central air conditioning. All of this is accomplished at 115V, which is the same energy cost of any commonplace refrigerator found in the average home.

Users also benefit from a decrease in their air’s dust levels, as there is no extensive network of metal ducts for harmful air particles to settle in. The forced air is constantly traveling throughout the living space and the environment is not given the opportunity to grow stagnant. Another added bonus to help maintain a comfortable, fresh setting in your home is often the dehumidify mode, which removes 0.6 gallons of lingering moisture in the air every hour, promoting healthier breathing air overall.

Another factor in the split AC’s rising popularity is its lightweight and portable functionality. Central AC units necessitate invasive refurbishment to the inside of the user’s residence, while the split models fit as-is into almost any space. These units tend to run small in stature and their ductless nature makes them easy to install, requiring tools as simple as the on-hand screwdriver gathering dust in everyone’s garage and some models even need no tools at all. With a do-it-yourself installation, it’s not necessary to hire a handyman to perform any expensive in-home procedures.

Most recently, models are more commonly being produced with Bluetooth/smart device pairing, which includes the ability for users to set a schedule using the accompanying phone app. Anyone can program their AC to cool their room to the optimal temperature before they arrive home to a readily comfortable setting.

Not solely used for households and living spaces, it is also a widespread addition to most RV camping models and outdoor garages/warehouses. These serve as effective cooling systems for these large, singular spaces at a price as low as $500 USD - as opposed to more conventional methods over $1k, alongside hefty energy bills.

It is still to date one of the most energy efficient and cost-effective solutions for most apartments and smaller living spaces--ideal for anyone working out of their home office, or for common living areas, during the summer. The best practice when accurately gauging any space’s AC needs is to measure the square feet of the room and compare it to the recommended standard BTU (British Thermal unit - the amount of heat required to raise the temperature of one pound of water by one degree Fahrenheit). For split AC units, consumers would aim for a unit capable of 10,000 BTUs at 350 sq. ft. - 450 sq. ft.

With the criteria of any user’s AC needs and the cost effective functionality of ductless, split AC units, the market continues to expand daily through online vendors such as Amazon. It is expected to only increase over the summer’s hotter months as users attempt to find the most cost effective and convenient method to remain comfortable.