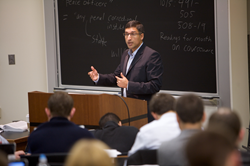 “The Institute for Constitutional Advocacy and Protection ... will help reinforce the rule of law at a time when legislative oversight is often limited at all levels of government," said Georgetown Law Professor Neal Katyal.

A team of distinguished attorneys with deep experience in trial and appellate advocacy, national security law and federal prosecution today launched the Institute for Constitutional Advocacy and Protection at Georgetown Law.

Drawing on expert litigators, Georgetown Law’s constitutional scholarship and a strategic approach to high-impact cases, the new institute aims to teach students to use the power of the courts to defend U.S. constitutional rights and values.

The Institute’s faculty director will be Georgetown Law Professor Neal Katyal, who has previously served as faculty director of Georgetown Law’s Center on National Security and the Law, has argued 34 Supreme Court cases and has served as acting U.S. solicitor general.  The executive director will be Joshua A. Geltzer, former senior director for counterterrorism at the National Security Council (NSC), who also served as senior national security legal counsel both at the NSC and in the Justice Department.  Rounding out the leadership team as senior litigator will be Mary B. McCord, former acting assistant attorney general and former principal deputy assistant attorney general for national security at the Justice Department, who previously spent nearly 20 years as a career prosecutor, including as Criminal Division chief and Appellate Division deputy chief in the U.S. Attorney’s Office for the District of Columbia.

Employing the model successfully used by Katyal in Hamdan v. Rumsfeld to dramatically roll back unprecedented government policies, culminating with the landmark Supreme Court decision in 2006, the Institute will pursue strategic litigation to draw clear recognition of constitutional rights in areas such as immigration restrictions, religious discrimination, free expression and privacy protection, national security, and whistleblower protection, among other areas.

“The Institute for Constitutional Advocacy and Protection is part of Georgetown Law’s commitment to teaching our students about constitutional design and structure, and will help reinforce the rule of law at a time when legislative oversight is often limited at all levels of our government,” said Katyal.

As with the Hamdan case, Georgetown Law scholarship and students will play a key role in helping develop, execute and support successful litigation strategies that can result in groundbreaking Supreme Court decisions.  When Katyal developed and argued Hamdan all the way up to the Supreme Court, more than 70 Georgetown Law students over seven semesters participated in nearly every aspect of the case’s preparation, and the case was mooted in Georgetown Law’s esteemed Supreme Court Institute. The resulting Supreme Court decision ensured that the Geneva Conventions would apply across the globe in what the government was calling the “War on Terror,” ending ghost prisons around the world and forcing the Bush Administration to end its use of waterboarding.

“The Institute will give Georgetown Law students incomparable opportunities to participate in impact litigation from the ground up in ways that will shape a deep understanding of constitutional law and the role of the courts in our democracy. We are honored that legal leaders with the stature of Neal, Mary and Josh are building this enterprise here,” said Georgetown Law Dean William M. Treanor.

McCord and Geltzer, who will also serve as Georgetown Law visiting professors, will launch a practicum course there starting later this school year. The Institute has already started working to support critical constitutional challenges.

Today the Institute filed an amicus brief in ODonnell v. Harris County (U.S. Court of Appeals for the Fifth Circuit, # 17-20333), a class action suit arguing that the Texas county’s practice of detaining misdemeanor defendants before trial based solely on their inability to pay money bail, while others who can are released, offends the Constitution, undermines confidence in the criminal justice system and fails to promote safer communities.

McCord led the drafting of the amicus brief on behalf of dozens of her fellow former and current prosecutors from around the country. It explains how reformed bail systems have been successful in ensuring appearance in court and protecting public safety by using individualized risk assessments and imposing non-financial conditions of release pending trial.

“As career prosecutors, we know that using bail to keep poor people locked up for days, weeks or even months for minor offenses is not only unconstitutional, but also counterproductive from a law enforcement perspective,” McCord said. “The legitimacy of the criminal justice system is dependent on it being a fair system that does not discriminate based on wealth.”

The Institute is also supporting key plaintiffs in another Texas case, City of El Cenizo v. Texas (Western District of Texas, San Antonio Division, # 5:17-cv-00404-OLG), which challenges a new state law that seeks to counter “sanctuary city” policies. The law, currently scheduled to take effect on September 1, purports to make it a crime for police and other public agencies to pursue an approach to enforcing federal immigration law contrary to that officially endorsed by the State of Texas, even if they believe it is in the best interest of public safety.

“Like Mary and Neal, I have dedicated much of my career to developing and defending responsible executive branch authorities,” said Geltzer who, among other things, previously worked at the Justice Department on reforming intelligence collection authorities after the Edward Snowden leaks and at the White House on developing the national strategy to fight ISIS.

“However,” Geltzer added, “we also recognize the critical importance of respecting the constitutional and moral limits to executive power, and we will fight to ensure the courts play a critical role in marking those limits and thus defending our country’s vital constitutional way of life.”

The Institute is also involved in pending legal matters related to civil servant protections and freedom of expression.

Georgetown University Law Center is a global leader in legal education and the preeminent U.S. law school based in the nation’s capital. A world-class faculty of celebrated theorists and leading legal practitioners offers students an unmatched breadth and depth of academic opportunities. Second to none in experiential education, the Law Center’s numerous clinics are deeply woven into the Washington, D.C., landscape. More than 20 centers and institutes forge cutting-edge research and policy resources across fields including health, the environment, human rights, technology, national security and international economics. Georgetown Law equips students to succeed in a rapidly evolving legal environment and to make a profound difference in the world, guided by the school's motto, “Law is but the means, justice is the end.”