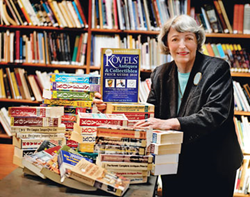 This September, author and antiques expert Terry Kovel will publish the 50th golden anniversary edition of Kovels’ Antiques & Collectibles Price Guide, the book that has become the bible of both serious collectors and weekend flea market enthusiasts. In anticipation of the 50th edition, Terry Kovel was recently featured on the WVIZ/PBS show Applause, an Emmy award-winning locally produced TV show that celebrates artists and cultural groups around Cleveland and Northeast Ohio. Terry has been a long-time supporter of public television and auctions antiques and collectibles on air for the station’s fundraiser.

Ever wonder what goes on at Kovels? The WVIZ/PBS crew visited the Kovel offices to create a short on-location segment. The segment can be viewed on WVIZ/PBS website, http://wviz.ideastream.org/news/a-peek-inside-the-collectibles-empire-of-terry-kovel. Fans of Kovels’ price guides, newsletter, newspaper column and other publications, and the Kovels.com website, as well as those who enjoy spending weekends at flea markets, will enjoy this 5 1/2-minute “Peek Inside the Collectibles Empire of Terry Kovel.”

Kovels’ Antiques & Collectibles 2018 50th anniversary edition will be available in bookstores and at Kovels.com in September.