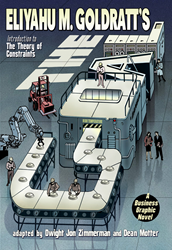 Fortune Magazine compared THE GOAL'S leading character to "Obi-Wan Kenobi instructing Luke Skywalker on the use of the force."

The North River Press Publishing Corporation has published "The Goal: A Business Graphic Novel" based on "The Goal" by Eliyahu M. Goldratt and Jeff Cox. The business novel that introduced Goldratt’s Theory of Constraints (TOC) in 1984, has been adapted by bestselling author Dwight Jon Zimmerman and award-winning illustrator Dean Motter.

Through the story of a harried plant manager who has been given 90 days to save his factory, "The Goal: A Business Graphic Novel" introduces readers to the core principals underlying the Theory of Constraints, a process of ongoing improvement that continuously identifies and leverages a system’s constraints in order to achieve its goals. TOC revolutionized the factory floor in the decades following publication of Goldratt’s original business novel. It has since been used by government agencies and the military, and applied in many areas of business, including supply chain management, healthcare, retail, sales and marketing, and project management.

Recognition of Goldratt’s contributions to the fast growing Agile, Kanban, DevOps and Lean Startup movements is bringing a new tech audience to TOC. Top tech executives have also brought attention to Goldratt’s work. CEO Jeff Bezos made "The Goal" required reading for his top executives at Amazon, where it has been called “a bible” for the team behind the company’s fulfillment network. Red Hat CEO Jim Whitehurst noted that the concepts Goldratt developed for manufacturing are now being applied to the development of software products and services.

Laurence Gadd, founder of North River Press, said "The Goal: A Business Graphic Novel" is appropriate whether you’re a CTO, software developer or MBA student. “Dwight Jon Zimmerman and Dean Motter’s graphic adaptation of Goldratt’s seminal work provides a new generation of visually-oriented readers, as well as those who grew up with comic books, with a fun, accessible introduction to TOC.”

The 140-page graphic novel adaptation is available as a paperback and ebook. The classic on which it is based has been a bestseller since it was first published in 1984. "The Goal" has sold more than 7 million copies worldwide, has been translated into 32 languages, and is taught in colleges, universities, and business schools around the globe.

About the Book
Alex Rogo is a harried plant manager who has been given 90 days to save his failing factory. If he doesn’t improve the plant’s performance, corporate headquarters will close it down and hundreds of workers will lose their jobs. It takes a chance meeting with Jonah, a former professor, to help him break out of his conventional thinking and figure out what needs to be done. As Alex identifies the plant’s problems and works with his team to find solutions, the reader gains an understanding of the fundamental concepts behind the Theory of Constraints.

About the Authors
Eliyahu M. Goldratt was an educator, author, physicist, philosopher and business leader. He is best known as the father of the Theory of Constraints (TOC), a process of ongoing improvement that continuously identifies and leverages a system’s constraints in order to achieve its goals. An advisor to major corporations and government agencies around the world, Dr. Goldratt was heralded as a “guru to industry” by Fortune magazine and “a genius” by Business Week. In addition to "The Goal," he authored ten other books, including four business novels. He developed TOC-derived tools such as Drum-Buﬀer-Rope, Critical Chain Project Management (CCPM) and the Thinking Processes, and continued to advance the TOC body of knowledge until his death in 2011.

Dwight Jon Zimmerman is a #1 New York Times bestselling author and editor. He is the author of more than a dozen books, including the #1 New York Times bestselling, "Lincoln’s Last Days" and the award-winning "Uncommon Valor: The Medal of Honor and the Warriors Who Earned it in Afghanistan and Iraq." He has written more than 300 articles on military history, as well as comic book stories for Marvel Comics and other comic book publishers.

As art director and designer for CBS Records, Bryon Preiss Visual Publications and DC Comics, illustrator Dean Motter has created a plethora of award-winning book and record jackets. As a graphic novelist, he is best known for "Terminal City," "The Prisoner," "Batman: Nine Lives" and his seminal creation, "Mister X." He has illustrated nonfiction comic books for the Davis S. Wyman Institute and the Los Angeles Holocaust Museum, including "The Book Hitler Didn’t Want You to Read" and "Karski’s Mission: To Stop the Holocaust."

About North River Press and Goldratt Books
The North River Press Publishing Corporation, founded in 1972, is the exclusive U.S. publisher of books by Dr. Eliyahu M. Goldratt. The company first published "The Goal" in 1984, and subsequently released three anniversary editions of the bestseller. Its Goldratt Books division has more than two dozen Theory of Constraints-related titles in its catalogue, including eleven authored by Dr. Goldratt.