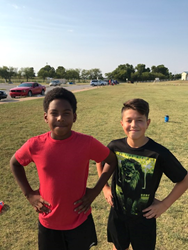 It's an honor to coach Pasqual and Marques, and I'm excited that they have this opportunity to go to Spain in the fall.

Every summer, Futbol Club Barcelona (also known as “FC Barcelona” or “Barca”) hosts camps nationwide for competitive soccer players to perfect their soccer skills and take their game to the next level. FC Barcelona is the second most valuable sports team in the world and the most successful sports team in Spain. Every young soccer player dreams of attending Barca’s camps from an early age and one day meeting Lionel Messi, forward for Barca and arguably the best soccer player the world has ever known.

After attending one of the FC Barcelona camps in Oklahoma, two talented players from Lawton were invited to visit Spain this October for ten days of intensive training with FC Barcelona. The players, Pasqual Arredondo and Marques Smith, are just starting middle school this week. The teammates play together on a local competitive traveling team, ECL United, coached by Daniel Myers. Although only eleven years old, both boys already have an impressive history in soccer.

Pasqual plays primarily on offense as a right-wing striker while Marques plays mostly defense. Both started playing soccer at the age of three and have competed at the state level, nationally, and internationally at last year’s ESPN Worldwide Tournament in Orlando, Florida.

When asked about his experience working with Pasqual and Marques, Coach Daniel Myers stated, "It's an honor to coach Pasqual and Marques, and I'm excited that they have this opportunity to go to Spain in the fall. They are gifted athletes and truly all-around great kids, and I love having them on the ECL United team.” Under Myers' direction, the team has one of the best competitive records in the state with a nearly undefeated record over the last two years.

In order to attend the training and have a parent accompany each player, both Pasqual and Marques are holding fundraisers and looking for sponsorships. Go to ECLUnited.com/spain for information on how you can help these talented young players travel to Spain.