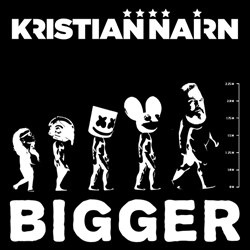 DJ, producer, and actor, Kristian Nairn will be releasing his third solo single, titled “Bigger,” on Friday, August 11th via Radikal Records. Renowned locally and internationally in the field of music and performance, Kristian Nairn is a prolific homegrown talent. Widely recognized for his portrayal of the lovable and loyal Hodor on HBO’s hit series Game of Thrones, Nairn has been DJing and producing for over a decade, holding down a residency for eleven years at Kremlin, one of Ireland’s most popular and enduring venues. Nairn is looking to build on the success of is past singles, “Up/Beacon (feat. Leanne Robinson)” and “4Love (feat. Salt Ashes)" which received rave reviews from publication like Ministry of Sound, Thump/Vice, and The Verge, with the release of “Bigger.”

Excited to share his new track, “Bigger,” with the world Nairn says, “I’ve been fortunate enough to tour the world over the past few years playing at some of the most amazing venues, with such incredible crowds, and this track really evolved from the sound of my live set. This is a much bigger sound for me than any of my previous releases, hence the name, and I can’t wait to have it out in the world.”

About Radikal Records:
Established in 1990, and based just outside of NYC, Radikal Records is one of the United States’ leading independent record labels. In business for more than 25 years, they are focused on marketing, promoting, and distributing artists – not only to audiences in the USA, but also on a global basis to partners world-wide. Artists included on their roster over the years include: 2 Unlimited, N-Trance, Zombie Nation, ATB, Yello, Scooter, Schiller, Blank & Jones, Cosmic Gate, Sinead O’Connor, Ayah Marar, and many others. For more information visit: http://www.radikal.com