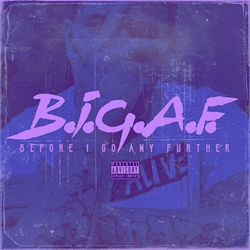 Brooklyn rapper Vinde Pvpers recently released his debut mixtape project, "B.I.G.A.F. (Before I Go Any Further)", which is currently available to stream and download on Coast 2 Coast Mixtapes.

All the stars aligned in Brooklyn, New York on October 19,1993 when Devin "Vinde Pvpers" Yard was born. In 2009 he began to rap and discovered that he could structure and create a flow with a unique rhyme & rhythm that could not be duplicated. Over the years Vinde has evolved in his development as a Hip-Hop artist, releasing songs such as "Blue Hawaiian", "Sweatshop", and "Back to Cali", just to name a few. He continues to consistently perfect his craft through his dedication and passion for his music he wants to share with the world.

Vinde Pvpers got his first break while working with DJ Webstar, who assisted Vinde with the creation of a song "All In", which also has developed it's own dance. Vinde's unique style and personaliy have afforded him the opportunity to share the stage with some of the biggest names in the music industry, including Meek Mill, Yo Gotti, Lil Uzi Vert, Fab and many more. Due to his undeniable talent, he has also been featured on Maino's latest mixtape, "Some Women Are Realer Than Men". Maino is quoted as saying, "I've been watching this kid since I first met him, he's got a different sound for the city." Vinde has become a very seasoned artist in the music industry.

As a member of D.O.D (Definition of Dreams) under team 80, Vinde is currently working his first mixtape titled "B.I.G.A.F. (Before I Go Any Further)" since being home after four years from incarceration. The new project displays his versatility and the unique sound of his music.