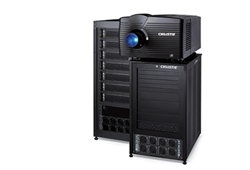 Christie®, a leader in creating and delivering the world’s best visual and audio experiences, is proud to be the exclusive projection partner of Big Cine Expo 2017, taking place at the Chennai Trade Centre, August 8-9.

“There is a huge appetite for technical knowhow and equipment owing to the untapped potential in the cinema theatre market and Big Cine Expo aims to become a viable platform for the cinema industry in India,” said Raghavendra T, Director, Big Cine Expo. “We are thrilled to have Christie, the market leader in cinema projection, as our associate partner. We are pleased to work with Christie to showcase the high-performance Christie CP4220 digital cinema projector for movie screenings. The CP4220 is one of the most reliable, cost-effective 4K DLP Cinema solutions available today and I’m confident that it will present a superior picture quality to the delegates at Big Cine Expo 2017.”

Rajesh Patkar, Deputy General Manager, Christie India, commented, “We are delighted to serve as the exclusive projection partner of Big Cine Expo by supplying our high-performance and dependable CP4220 cinema projector for movie screenings. Delegates and visitors can also check out the Christie 6P laser projection system at UFO Moviez’s booth, and I’m proud to note that the Christie 6P system offers premium large-format theaters, brightness and color levels that have never been achievable using other technology.”

Lin Yu, Vice President, Christie Asia Pacific, added, “India is one of the world’s emerging economies with the entertainment sector occupying a dominant position. In fact, India produces the highest number of movies in the world and South India, in particular, has a massive movie industry with 6,000 of the total estimated 9,500 screens in the country. Christie is committed to the cinema market in India, and is well-positioned to leverage on the rapid growth of this industry by supporting our partners and clients in delivering cutting-edge cinema technologies to Indian audiences for an exceptional movie-going experience.”

Besides its role as the exclusive projection partner, Christie will also reinforce its position as an industry thought leader by participating in a panel discussion titled “The Next Generation Cinema Viewing Experience” on August 8 at 4.30 p.m. Christie will be represented by Dr. Don Shaw, Senior Director, Cinema Sales, Christie Asia Pacific. As well, Shaw will deliver a presentation titled “Illumination Options for Cinema” on August 9 at 2.15 p.m. The presentation will focus on how Christie’s full suite of cinema projection solutions - which include xenon and laser illumination - can bring value to exhibitors and patrons, and deliver the best and most immersive cinematic experience.

PVR Cinemas, the largest film and retail entertainment company In India, has purchased 14 sets of Christie Duo dual-projection system to be deployed in its theaters across the country. The first of which will be installed at PVR Mani Square Mall in Kolkata. Designed to provide uniform pixel convergence across the entire screen, the Christie Duo system allows one projector to be dedicated to the right eye and one projector to be dedicated to the left. The result is one of the brightest, most engaging and comfortable 3D viewing experiences.

The Christie CP42LH projector head represents the pinnacle of RGB laser cinema projection design. Producing brightness levels up to 60,000 lumens and a color gamut that exceeds the DCI P3 color and replicates the Rec. 2020 space, the CP42LH is the most advanced RGB laser cinema projection system on the market. Available in dual-head (6P) and enhanced wavelength diversity (EWD) configurations, the CP42LH offers exhibitors a projection solution that allows them to define their own giant screen solution.

Currently in its second year, Big Cine Expo is an interactive and value-added platform targeted at theatre owners, design consultants, equipment manufacturers, system integrators, industry stakeholders and the user community for single-screen and multiplex cinema entertainment in Asia and India. The annual convention is the only expo of its kind in India dedicated to all aspects of cinema exhibition.

Christie Digital Systems USA, Inc. is a global visual and audio technologies company and a wholly-owned subsidiary of Ushio Inc., Japan (JP:6925). Consistently setting the standards by being the first to market some of the world’s most advanced projectors, complete system displays, and cinema audio solutions; Christie is recognized as one of the most innovative visual technology companies in the world. From retail displays to Hollywood, mission critical command centers to classrooms and training simulators, Christie display solutions and projectors capture the attention of audiences around the world with dynamic and stunning images, accompanied by awe-inspiring sound. Visit http://www.christiedigital.com.