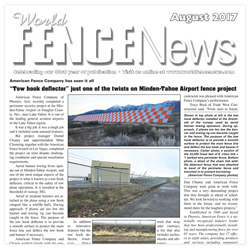 From start to finish, Dan Chaney & American Fence Company were great to work with. This was a very demanding project that they brought in ahead of schedule. We look forward to working with them in the future, & we recommend them for the toughest projects.

As featured on the cover of the August issue of World Fence News Magazine, American Fence Company is proud to announce completion of a perimeter security project at the Minden-Tahoe Airport in Douglas County, Nev., near Lake Tahoe. It is one of the leading general aviation airports in the Lake Tahoe region.
One of the most unique aspects of the project is what is known as a tow hook deflector, critical to the safety of tow plane operations. The purpose of the tow hook deflector is to provide a smooth surface to protect the main fence line and deflect the tow hook and banner if necessary.

The project did not come without its share of challenges, including a tight schedule, freezing temperatures, snow, heavy rain and snow, mud, and highway closures. The entire project was completed in 90 calendar days, during one of the worst winters on record in the Sierra Nevada Mountains.

In spite of these obstacles, Project Manager Daniel Chaney and Superintendent Mike Channing, together with the American Fence branch in Las Vegas, completed the project on time. Chaney said, “Mike Channing did a great job of interacting with the inspector, engineer and general contractor.”

Tracy Beck of Trade West Construction said, “From start to finish, Dan Chaney and American Fence Company were great to work with. This was a very demanding project that they brought in ahead of schedule. We look forward to working with them in the future, and we recommend them for the toughest projects.”

About American Fence - Established in 1948 and based in Phoenix, AZ, American Fence is a nationally recognized industry leader that has been professionally installing fence for over 60 years. Providing the highest level of products and service, we provide all your fencing needs including fence rental, commercial and industrial installation, and materials for the “do-it-yourselfer” and fencing contractors.