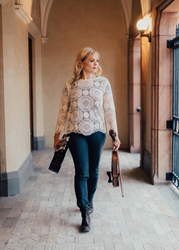 This album embodies all the peace and happiness that I associate with home...

“There is nothing like home. It’s where love is and where relationships grow,” said Nelson. “I truly feel this album embodies all the peace and happiness that I associate with home and so for me, it was the perfect title choice. Using emotive, reminiscent, and peaceful melodies I feel that I’m able to capture that genuine essence of what it means to be home.”

Camille was born and raised in Salt Lake City, Utah and started violin at the age of 6 and guitar at the age of 15. She draws musical and creative inspiration from her travels abroad. She’s visited more than 70 countries, integrating a uniquely multicultural perspective into songwriting following years living in South Africa, Germany, Switzerland, and Italy. Camille currently teaches graduate courses in management, communication and leadership at the local University and holds Ph.D. in Leadership Studies.

“My first album really developed from my early influences while Lead Me Home is the album that I feel has really brought my influences full circle” said Nelson. “On this album I am incorporating so many different musical elements that represent the passionate, multi-genre artist I have become over the years.”
Camille signed with Paul Cardall’s label, Stone Angel Music in early 2017 and worked with Trevor Price as the engineer and producer of Lead Me Home.

About Camille Nelson
Camille Nelson is a musician specializing in acoustic-driven folk music. Classically trained in guitar and violin, Camille creates fresh and kinetic melodies combined with unique guitar percussion. These compositions convey elaborate and heartfelt stories using the entirety of her instrument. Her songwriting style has been influenced by artists from U2 to Brahms, while her playing style reflects influences from fingerstyle artists Kaki King and Andy Mckee. Audiences are introduced to elements of classical string arrangements with atmospheric guitars and vocals for a modern edge.