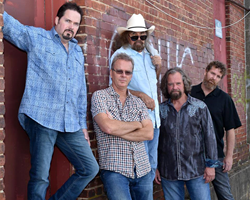 Pyle survived the plane crash of 1977 that killed band members Ronnie Van Zant, Cassie Gaines, and Steve Gaines, as well as the two pilots. Although he suffered several broken ribs and other injuries, Pyle walked over a half a mile through snake and alligator infested swamp lands to get help for the other survivors after the crash. Pyle’s bloody appearance frightened locals, who met him with a gun until the fire department arrived. The surviving members of Lynyrd Skynyrd credited Pyle with saving their lives.

Pyle says The Artimus Pyle Band isn’t just a tribute to Lynyrd Skynyrd. It’s a tribute to the man who defined the band and its classic sound: Ronnie Van Zant.

“If it wasn’t for Ronnie, no one would know my name,” Pyle said.

The 2017 edition of Artimus Pyle Band includes some of the most seasoned musicians in the Southeast, working with some of the biggest names in the music industry, including Kenny Chesney, John Michael Montgomery and Quiet Riot. The Artimus Pyle Band set will feature Lynyrd Skynyrd’s greatest hits performed in the original style of the “classic” lineup which featured Artimus Pyle, Ronnie Van Zant, Steve Gaines, Leon Wilkeson, Billy Powell, Gary Rossington and Ed King.

The No-Cost weekend event kicks off Friday, August 25 with the Lincoln County Health Fair from 10 a.m. to 3 p.m.