Karen Curry is NBC News’ former Bureau Chief and lived fifteen years in London, covering the UK, Europe, the Middle East, and the untimely death of Princess Diana. Professor Curry is leading nine students from Drexel University’s Graduate Program in Television Management on a whirlwind week of visits to global media companies that affect the way news is reported and distributed around the world. 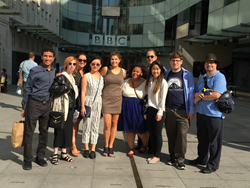 Karen Curry believes to understand global TV you have to visit London. Curry, a TV Management professor at Drexel University, should know. As NBC News’ former Bureau Chief, she lived fifteen years in London and from there covered the UK, Europe, the Middle East, and the untimely death of Princess Diana.

That’s why Professor Curry, accompanied by nine TV students from Drexel’s Graduate Program in Television Management, will connect her former London colleagues and her students during a whirlwind week of visits to global media companies that affect the way news is reported and distributed around the world.

The visit is part of a ten-week online course that focuses on the role of London-based companies in the larger global media ecosystem. Once there, students will start their week with a bus tour of the world cultural capital and attend a dinner with Lynne Edwards of CBS News at The Frontline Club, which is known internationally as a gathering place for journalists and photographers. John Owen, Chairman of the Frontline Club, will also join the students.

“There’s a lot to see and learn about the media industry in London, and these students will have the unique opportunity of meeting in person many of the media leaders who have been teaching them online during the summer quarter,” says Curry.

Curry’s graduate students will take part in a street photography workshop with Sebastian Rich, internationally renowned photojournalist, giving them a bird’s eye view of what makes London such a cinematic city. They’ll visit NBC London, CNN, BBC and Channel 4 News, and meet popular stage and screen actress Lesley Sharp of the original Full Monty and the award-winning Scott and Bailey that ran on PBS in the US.

This August marks the 20th anniversary of Princess Diana’s death and the students will have a VIP tour of Althorp, her childhood home and burial place, arranged by her brother Earl Spencer. Additionally, after touring the state rooms at Buckingham Palace, they will have tea with Robert Jobson, Royal Editor of The Evening Standard and Good Morning America’s royal expert. Jobson covered Princess Diana extensively and has covered the Royal Family for 30 years.

“Experiencing the cultural richness of London is part of the experiential learning model on which the course is based,” Curry adds. “What would a summer visit to London be without an evening at the Proms?”

Professor Karen Curry says her students will gain a lifetime of knowledge during their jam-packed six-day trip. “Television Management students always take advantage of the opportunities in London,” she said. “They’ll carry what they learn there throughout their careers and will have these contacts for life.”

NOTE TO EDITORS: Professor Curry and her students will be available for interviews during their week in London (August 14-18). Photos and videos of the visit will also be available.