Tales From the Sunshine Land and the Ghana Fifty

David Wedd, a British intelligence officer in 1956, recalls Ghana’s Independence from Britain in his new book. 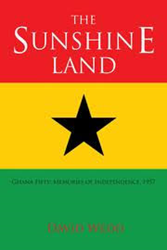 ...I quickly fell in love with Ghana, its land and people.

When author David Wedd recalls memories from his childhood, his include traveling to West Africa’s Gold Coast and exploring the country with an army.

At just 19 years old, Wedd served as an intelligence officer for the British army in West Africa, as the country gained Independence from British rule and became Ghana. Wedd shares his experience in “The Sunshine Land – Ghana Fifty: Memories of Independence, 1957.”

“I witnessed the last days of Empire rule, as the Gold Coast transformed into Ghana,” Wedd said. “Most accounts of what happened back then in movies and books suggest that British rule in its colonies was unfeeling and even brutal. Our part of it certainly wasn’t and I quickly fell in love with Ghana, its land and people.”

In “The Sunshine Land,” Wedd describes his exploration of the rain forest and Africa’s wildlife, while he journeys north to the Sahara Desert and Timbuktu. Along his path, he encounters many interesting people and experiences, including a witch doctor and Kwame Nkrumah, Ghana’s first ruler.

“The country and landscape has changed a lot since I lived there,” Wedd said. “Because of urbanization and the destruction of the rain forest, today’s Ghana looks much different.”

About the author
Sixty years ago, David Wedd was a young army officer in West Africa’s Gold Coast, when the country became Ghana, the first black African colony to gain Independence from British rule. Wedd served as an Intelligence Officer in the British Army in 1957 and fell in love with Ghana and its people. To learn more about the author and his book please visit, http://www.authorhouse.com/Bookstore/BookDetail.aspx?BookId=SKU-000223896.