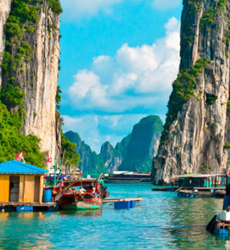 Travelers looking for the perfect mix of casual comfort and outright adventure should look no further than upscale cruise line Windstar Cruises. The 212-guest Star Legend will ply the ancient waterways of Asia in the way only small ships can. The line just announced five new cruise dates in fall 2018 running September to November and has added to already diverse offerings in Asia for 2017 and 2018 on 18 different itineraries with 25 different departure dates spanning 7 to 34 days.

Visiting both well-known ports and hidden harbors across Southeast and East Asia vacation options include a President’s Cruise to the Philippines and Borneo, fresh land tour options, recently added itineraries, and fascinating shore excursions that show off the region in the line’s “180 degrees from ordinary” style of cruising.

After two intriguing itineraries in Arabia, Windstar’s Asia cruise season begins in December of 2017 and sails through May of 2018, when the ship navigates to Alaska for the summer season. The itinerary offerings are exceedingly diverse with port calls to small exotic harbors where cruise ships rarely call to epic visits at the icons of Asia including Beijing, Hong Kong, Tokyo (Yokohama), Singapore and Bangkok.

Windstar guests will embark upon a journey that allows them to enjoy a wider range of locales on land with four new pre- and post-cruise tours, while also getting to spend a lengthier time at sea with the addition of five longer itineraries via Windstar’s new Star Collector Voyages. Aboard the sophisticated Star Legend accommodating an intimate 212 guests, the casually elegant ship will provide access to distinctive cultural, historical, and culinary experiences, tantalizing all the senses and making for an unforgettable holiday.

The new itineraries and land tours cover architectural favorites and geological splendors like the Great Wall of China, Angkor Wat, and Mount Fuji, as well as the chance to sail across the Pacific from Anchorage to Yokohama. (Newly added for the fall of 2018, visitors will delve into the magnificent and rustic Alaskan wilderness before soaking up all that Japan has to offer.)

A highlight of 2018 in Asia is Windstar's President's Cruise, setting sail on The Best of the Philippines & Borneo itinerary January 6 with Windstar President John Delaney and Star Legend Godmother Gloria Bohan. The cruise is made even more special because many of Windstar's crew is from the Philippines, so it's a homecoming of sorts. As such, this cruise is an incredible way to explore the culture and country alongside those who love and know it best; Filipino crew will join guests on shore excursions to visit their native landmarks and will share tips on their favorite activities and beloved locations in their homeland.

There are a variety of special events planned on board the 14-day cruise, including time getting to know the president and godmother of the small ship cruise line, and an itinerary chock-full of the most beautiful islands and beaches in the world like Palawan and Boracay. The voyage features an overnight in Manila and a stop at the oft-overlooked (and rarely visited by cruises) Hundred Islands National Park. A visit to Brunei takes guests inside one of the wealthiest countries on the planet, affording a look at some of the largest and most beautiful mosques in Asia.

“Being godmother of Star Legend is one of the greatest highlights of my career,” says Bohan, who is founder and president of Omega World Travel. “I have grown to love her staff and crew, who now feel like family each time I board. The President's Cruise will introduce the homelands of many of the crew and will let us experience a unique adventure to many exotic islands and ports, something Star Legend excels at.”

Additionally, Asia shore excursions are now “live” on Windstar’s website and able to be booked by guests. With so many new and noteworthy offerings from culinary adventures to must-see UNESCO World Heritage Sites, advance reservations are recommended particularly with the more popular and unique experiences like Ko Kut Treepod Dining. Offered by Windstar aboard the Icons of Southeast Asia cruise, this one-of-a-kind dining affair, inspired by the free-spirited nature of childhood, involves climbing up high to a leafy canopy where guests are comfortably seated in a bamboo pod. They are then gently hoisted high up onto tropical foliage of Ko Kut’s ancient rainforest, taking in the shoreline views as a gourmet feast is delivered to them via the zipline acrobatics of a personal waiter.

Uniting land and sea is the Angkor Wat Land Tour to/from Bangkok with four pre- and post- cruise options on Windstar. Over the course of three days on land, guests will have the chance to marvel over the impressive architecture of religious temples, predominantly Angkor Wat, a UNESCO World Heritage Site. Here guests, who wish, will be driven in the wee hours of the morning to witness a breath-taking sunrise over this Seventh Wonder of the World. A visit to Wat Atvea Pagoda, located in the Angkor Archeological Park, is also included where there will be an opportunity to meet monks and receive a traditional Khmer Water Blessing from them.

The Beijing and Xian Land Tour can be experienced as a pre- or post-cruise option on three of Windstar’s Asia cruises, with a three-day land journey that begins in Beijing at the Temple of Heaven, providing an authentic look into local city life. From there, the “Forbidden City” will present visitors with some of the best-preserved pieces of classical Chinese architecture before they head to Tiananmen Square, home to Chairman Mao’s remains. No holiday in China is complete without sampling the flavorful, local cuisine, so guests will be taken to a famous Peking duck restaurant in Beijing. Guests will also experience the Great Wall before flying to Xian to encounter the Terracotta Warriors and visit the old city.

The Kyoto/Osaka Land Tour is a three-day option pre- or post-cruise on Windstar’s Grand Japan. Highlights include Osaka Castle, the UNESCO Site of Nijo Castle and Kinkakuji Temple, also known as the Golden Pavilion and aptly named because the walls and eaves are covered in shimmering gold leaf.

There are five new sailings in the Asia Collection open for bookings in fall 2018 and five new Star Collector Voyages in Asia, which combine some of Windstar’s itineraries in the region for a more in-depth exploration. Free daily laundry is also included. These sailings range from 14-34 days, below are a few highlights.

Singapore & Siam Holiday presents an exotic and stress-free alternative to celebrating the holidays over seven glorious days. Let the festivities begin with an overnight stay in Singapore before sailing to Malaysia to Penang’s UNESCO World Heritage Site in Colonial George Town and then ascend on the Langkawi Gondola to get a bird’s-eye-view of the rainforest wonders. Upon arriving in Ko Yao Noi, sea lovers can swim with the colorful butterfly fish in the aquamarine waters of this Thai island paradise or venture inland to scope out the quaint rural villages. An overnight stay in picturesque Phuket tops off this unparalleled holiday escape.

What better way to ring in the New Year than with a Taste of Siam & Singapore New Year’s Eve cruise? Guests will spend seven days sailing from Phuket (Patong Bay), Thailand to Singapore, stopping in Malaysia along the way. This exhilarating voyage commences in Phuket, famous for its pristine beaches. It continues onto Ko Phi Phi, made popular by the 2000 film The Beach, where party-goers can pop open their bubbly to celebrate the arrival of 2018. After a day at sea, create iconic memories in Ipoh, the fourth-largest city in Malaysia, where evidence of a British colonial past remain, and then take in the 360-degree views from the top of one of the world’s highest towers in Kuala Lumur. The trip concludes with a visit to the UNESCO city of Malacca and an overnight stay in bustling Singapore.

Aleutians & North Pacific Crossing will create an extraordinary passage between Seward, Alaska and Tokyo, Japan over the course of 16 days in fall 2018. A cruise that emphasizes the less-frequented ports of call will retrace the route of Russian-America fur trade, island-hopping along the Aleutian Archipelago. Visitors can live out their wildest adventures as they sportfish in Kodiak – possibly spotting one of their famous bears – or kayak in the remote waters of Sand Point catching glimpses of bison. Fans of “The Deadliest Catch” will get the chance to visit Dutch Harbor which was featured on this TV Show for being the only deep-water port in the Aleutians and main delivery port for king crab. This awe-inspiring excursion continues in Japan with Kushiro, home to Japan’s largest marshland and endangered Japanese cranes, and Miyako, a city slowly recovering from the devastating 2011 tsunami and whose Jodogahama Beach has been nationally dubbed a “Place of Scenic Beauty.”

While Windstar’s 10-day Grand Japan itinerary was originally announced solely for the spring of 2018, Windstar has now added two new fall 2018 sailings on this already wildly popular itinerary. Fall colors promise to be spectacular, along with fewer crowds during this less-visited but no less gorgeous time to explore Japan and South Korea.

For another take on Japan with a taste of Korean and Chinese culture, Pop Culture Kings of Asia offers 11 days of uncovering over 17 UNESCO sites, as well as the birthplace of J-Pop and Harajuku culture, in fall 2018. Beginning in Tokyo and ending in Beijing, cruise dwellers can choose to immerse themselves in retail heaven in the largest underground mall in Seoul or meditate in the serenity of Kyoto, Japan’s Bamboo Forest. Other highlights of the trip include Shimizu, home to Mount Fuji, Japan’s highest mountain, the nearby 65-foot Shiraito Waterfall, and the unforgettable Tamano (Uno), a location where very few vessels are able to pass through. Of course, stopping in Hiroshima to sample the Okonomiyaki savory pancakes cannot be overlooked before sailing over to South Korea where the dormant Hallasan Volcano and the world’s longest lava tunnels are also a must-see.

Comprehensive China Exploration is just that — an 11-day experience highlighting the best of China and Taiwan and featuring overnights in Shanghai, Taipei, and Hong Kong in fall 2018. This is a foodie’s dream come true with opportunities to taste the umami of oyster pancakes found in the night markets of Taiwan, sample authentic dim sum in Hong Kong, and sip the local brewed beer in Qingdao. Senses will be tantalized in Shanghai, the “Pearl of the Orient,” from the maze of shops and vendors in Old Shanghai to the colorful tall buildings dotting the impressive skyline. In Zhoushan, the “Venice of China” sightseers can explore the 36 bridges connecting the city or the nearby island of Putuoshan, home to 80 Buddhist monasteries and gardens.

For additional information on private yacht-style cruising with Windstar, contact a travel professional or Windstar Cruises by phone at 877-958-7718, or visit http://www.windstarcruises.com.