After "My Shining Hour" successfully launched on Daystar Canada, Juno-Nominated Male Vocalist of the Year Steph Carse has been honored to share his personal story around the globe through a self-produced TV event airing on the Daystar Television Network. 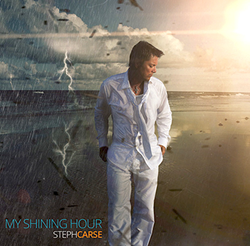 On the self-produced program, Carse shares the experiences of his music career, which has taken him from the top of the charts, to living out of his car, to the recording of his new album “My Shining Hour”.

After a successful launch on Daystar Canada, Juno-Nominated Male Vocalist of the Year Steph Carse is honored to share his personal story through the “My Shining Hour” TV event airing worldwide on the Daystar Television Network tomorrow, August 12. “My Shining Hour” will air twice, from 7:30-8:30am and from 8:00-9:00pm ET.

A short trailer for the “My Shining Hour” TV Special is available on YouTube at https://youtu.be/fmFPxePab_A.

On the self-produced program, Carse shares the experiences of his music career, which has taken him from the top of the charts, to living out of his car, to the recording of his new album “My Shining Hour”. Told through music and narrative, Carse takes viewers from Canada to the U.S., to Africa, and to Israel sharing his journey of music, restoration and discovering his true calling.

Always a champion of worthy causes, Carse co-wrote and performed the anthem "Reach Out," the official song for The American Red Cross. He also wrote and performed the title track for the album "Holiday Heroes" for The Special Olympics in Canada. The “Holiday Heroes” album generated over $2 million in net profit for The Special Olympics. Carse has launched his Y i Count anti-bullying campaign to provide a platform for this generation, helping them to understand their true value and potential and the power of words, and to counteract the aftermath of bullying. The special debuts the Y i Count theme song, “Awesome.” See Steph’s recent performance of “Awesome” at the Bell Center in Montreal: https://www.youtube.com/watch?v=SXRoinumw8I

As a songwriter, performer and recording artist, Carse has sold over half a million albums worldwide and received a 5-star review for his 36-show run in Las Vegas from Jerry Fink of The Las Vegas Sun. Known for his impeccable 4-octave vocal range, his story was featured in the PBS Documentary “A Portrait of Steph Carse.”

As a television producer, Carse won 5 awards from The Florida Motion Picture and Television Association, including Best Feature Film and Best Male Vocalist, for the one-hour TV special “Reach Out” that he produced for PBS.

Praise for Carse’s work includes:
“A truly talented performer with a distinctive voice style and the vocal range to master any work he performs,” - Diane Bliss of PBS.
“The singing sensation with Oscar-winning good looks and a voice to match.” - Jason Buchanan of The New York Times.
“Steph’s voice and music convey a great passion for his art,” - Eric Schilling, 16-time GRAMMY Award winner.