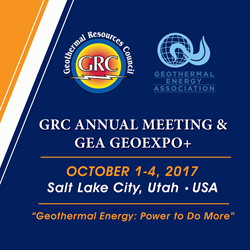 In addition to the main event of the GRC Annual Meeting & GEA GeoExpo + taking place October 1-4, 2017, there will be one fieldtrip before the conference and one fieldtrip just after.

From September 28 - October 1, there will an opportunity to visit the geothermal wonderland of Yellowstone National Park in the company of geothermal experts. Duncan Foley and Roy Mink will lead a four-day trip of a lifetime to view the wide range of hydrothermal features set amongst stunning natural scenery and wildlife.

In addition, there will be a two-day tour of fascinating geology and geothermal sites in the south of Utah. On October 4 and 5, Rick Allis, Director and State Geologist of the Utah Geological Survey will lead a group to view geothermal power plants and the site of the Utah-FORGE (Frontier Observatory for Research in Geothermal Energy) project.

Registration for the GRC Annual Meeting is now open and includes entry to the GEA GeoExpo +. Room reservations can now be made on the GRC website at geothermal.org. A discounted room rate at two hotels is available until September 5, so early reservations are recommended.

With the experience and dedication of its diverse, international membership bolstering a more than 40-year track record, the Geothermal Resources Council has built a solid reputation as one of the world’s preeminent geothermal associations. The GRC serves as a focal point for continuing professional development for its members through its outreach, information transfer and education services.