TurquoiseJewelry.com has announced the release of a new collection of jewelry inspired by the classic film, Breakfast at Tiffany’s, staring Audrey Hepburn. 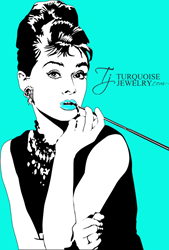 The TJ team has taken the liberty of modifying the styles seen in the classic film to fit their aesthetic of their artists and give people more contemporary designs.

Piquant and timelessly classy, Breakfast at Tiffany’s has inspired generation after generation with the wit and crass of Truman Capote’s great work, combined with a stunning performance by the captivating Audrey Hepburn.

One business that takes inspiration from the film is TurquoiseJewelry.com. The company’s spokesman, Jack Burch, gave a comment on the new collection, titled “The Moon River Collection,” “We wanted to do something fun this year so we decided to take a vote on our favorite movies and the majority of votes went to Breakfast at Tiffany’s. When we decided that, we all gathered to watch the movie and took notes to create a new collection based on the styles and jewelry Hepburn’s character, Holly, wears throughout the film. I think this has turned out to be one of our most inspired collections that our fans will enjoy.”

Turquoisejewelry.com is one of the largest providers of turquoise jewelry in the Southwest region, working with artists to provide people with new and innovative designs.

The TJ team has taken the liberty of modifying the styles seen in the classic film to fit their aesthetic of their artists and give people more contemporary designs. One piece, a 4-strand Navajo turquoise beaded necklace, will give people the same allure and feel of Hepburn’s multi-strand pearl necklace that’s become an iconic image of the movie. Another item, Holly’s famous tiara is made a little more functional with TJ’s turquoise stone hairclip.

All the styles and pieces seen in this collection were hand-selected by the staff members to fit the chosen motif.

Burch concluded by stating, “I think the majority of people, especially our fans, have seen this classic. Our hope is that they get the same kick out of it we did. Taking the time to watch the film, a few times, and coming up with just the right pieces was one of the highlights of our year. We hope that people will see where the inspiration comes from then they see these larger pieces that have a modern twist. Maybe we’ll see a few more Holly Golightlys running around town with our jewelry.

Anyone interested in seeing “The Moon River Collection” and various other jewelry from TurquoiseJewelry.com can visit their site any time.