Traverse City Tourism: Home to over 40 wineries and a renowned culinary scene, Traverse City, Michigan has become a personal respite to television chef Mario Batali. This September catch him on The Chew featuring one winery's food menu curated by the big cheese himself. 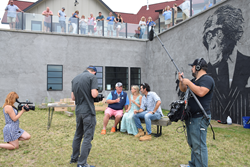 Batali, Smart and Oosterhouse on set at Bonobo Winery

What’s better than sipping wine and nibbling small plates designed by Chef Mario Batali? Oh, just all the above with the Crocs-clad man on the next stool over. In a Facebook post earlier this month, Traverse City’s Bonobo Winery released a photo of television chef Mario Batali looking chummy with Bonobo Co-Owner/television personality Carter Oosterhouse. The longtime buddies and business partners announced an upcoming Bonobo feature on ABC’s The Chew this September. Bonobo, located on Old Mission Peninsula, is one of 40-plus wineries in the Traverse City area.

“It’ll be interesting,” laughed Todd Oosterhouse, Bonobo Co-Owner, “the show starts off with Mario saying, ‘Hey we’re at Bonobo Winery, this is the best rosé I’ve ever tasted and by the way, I curate the food menu here.’” Thanks to a friendship between Mario, Carter and wife Amy Smart, the couple called on the food expert early in the winery planning process. Since then, their wines are shipped to Mario where he responds with a devised menu catered specifically to Bonobo wines. The result? A win-win food and drink combination, which occasionally includes the acclaimed restaurateur in person.

When he’s not filming, opening restaurants or writing cookbooks, Mario escapes to his Northport home where he sings the praises of local northern Michigan food and drink. But he’s also become an advocate for the northern lifestyle altogether. In the Facebook Chew announcement, you’ll see him photographed sporting a FLOW (For Love Of Water) hat, a Traverse City based non-profit organization protecting and preserving the Great Lakes.

As for the recently filmed Chew episode (specific airdate not yet released), viewers can anticipate an exchange of skillsets between the celebrity chef and the famous carpenter. First, Mario schools Carter on the making of his original whitefish pâté, which Mario created to pair with Bonobo’s chablis-style chardonnay and rosé. Soon enough, the student becomes the teacher when Carter shows Mario how to build a bench. Throughout the episode viewers catch glimpses of the tasting room, kitchen, deck and vineyard, and hear from the boys on their favorite summertime celebrations Up North.

“It was a fun day to watch their great friendship unfold in such a beautiful setting,” commented Abby Clear, the winery’s Marketing and Events Manager. “You can expect lots of laughs and funny stories to come when the episode airs. You may even learn a few things too!”