Recent release “Deception” from Page Publishing author Tim Burke is a suspenseful mystery introducing Wade Bishop, a detective trying to overcome a troubled past while attempting to save his marriage and solve a string of murders in which the victims are members of an organized crime syndicate. 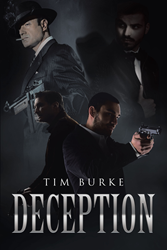 Tim Burke, a lifelong fan of mystery, action, suspense, and drama and the married father of a baby girl, has completed his new book “Deception”: a gripping and nuanced crime drama.

Wade Bishop is a dedicated detective working to overcome trauma from his troubled past that continues to haunt him. He lives a quiet, normal life in a peaceful neighborhood with his wife, Tina, a kindhearted nurse who works at the local hospital. When their relationship becomes estranged, they struggle to find a balance between their professional and personal lives together in to salvage their once-happy marriage. Meanwhile, a series of murders believed to be the work of a vengeful vigilante targeting organized crime has the criminal underworld on edge.

Hector Salvatore, a mobster who uses his night club as a front is convinced the outlaw must be dealt with before it’s too late and their empire as they know it is destroyed. As Wade battles his eternal demons, he sets out to bring the methodical madman to justice alongside his trusted partner, Lucas Foster, and their colleague, Officer Connor Sherman. The triumvirate hits roadblocks at every turn until new evidence comes to light that could point the investigation in the right direction. Wade suddenly meets his match when he finds himself thrust into a dangerous game of wits when a mysterious stranger named Damon Pierce arrives, a private investigator claiming to have important information for them regarding their vigilante case. The detective quickly begins to suspect that there’s more to their mystery guest than meets the eye, and as the day unfolds, dark buried secrets are revealed.

Readers who wish to experience this engrossing work can purchase “Deception” at bookstores everywhere, or online at the Apple iTunes store, Kobo, Amazon, Google Play or Barnes and Noble.