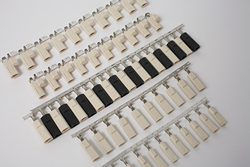 with 3.5 times the separation force compared to the nearest competitor, ETCO’s insulated connectors are second to none in the most rigorous conditions.

The glass reinforced ETCO insulated connector, is engineered to collapse on itself in a scenario when there’s a malfunction. This will allow it to hold until an automatic shutdown cycle occurs within the operating equipment.

ETCO’s insulated connector are rated UL94V-0, RoHS compliant and are flame retardant. In 96 hours of testing in humid conditions, the connectors required 3.5 times the separation force connectors when compared to competitor offerings.

ETCO Vice President of Sales, John Stiness states, “with 3.5 times the separation force compared to the nearest competitor, ETCO’s insulated connectors are second to none in the most rigorous conditions.”

Founded in 1947, ETCO is a privately owned company. The Company manufactures precision stampings as well as rubber and plastic molded products used in a range of industrial manufacturing including automotive, appliance, aviation, medical, information technology hardware, networking and many others. ETCO also has major customers in a variety of other industries in the USA and in over 30 countries throughout the world. ETCO has factories and a research complex in Bradenton, Florida and a factory and engineering center in Warwick, Rhode Island.