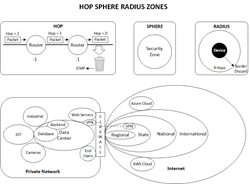 Alderson has heard the call before, responding to the United States Pentagon following the horrific events of September 11, 2001 and many engagements to address network and application problems for the Joint Chiefs to include six deployments with US Central Command troops to Iraq and Afghanistan.

“We created a system that denies access before a system compromise can occur by limiting data to a sphere of travel.” said Bill Alderson. while describing the mission of this company. “The world’s data is at risk from cyber terrorists, international hackers, malware, viruses and ransom-ware which our newly patented security solution is designed to limit and prevent.”

“This is a nice and clean approach to reducing the exposure surface, and well worth implementing broadly.” Said Dr. Harry Saal. Dr. Saal is former Director of the Stanford Linear Accelerator, Founder Network General, creator of the Sniffer Network Analyzer.