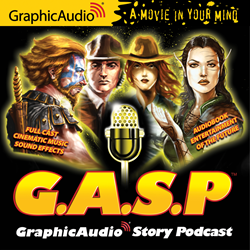 GraphicAudio® A Movie in Your Mind® is thrilled to announce the launch of G.A.S.P.™ GraphicAudio Story Podcast, available for free. Each week GraphicAudio will release ALL-NEW serialized episodes of a complete full-length story, along with episodes that feature short-stories in GraphicAudio’s unique and engaging audiobook entertainment format. The first season includes Owl & Spencer 1: The Beginning of the End, an Original Western/Mystery written by GraphicAudio’s own Director and Voice Talent Michael John Casey, as well as a few other surprises from other authors and in our Fantasy/Sci-Fi genres. G.A.S.P.™ episodes will be available on a weekly basis through the Fall and GraphicAudio® plans to expand to daily episodes in January.

Owl & Spencer tells the story about, two lawmen in the newly ratified state of Colorado who struggle to keep order while facing their own personal demons. US Deputy Marshall Edward Spencer is re-assigned to Colorado after the death of his wife. Sheriff Jacob Gannon manages grief over his son's suicide while keeping the peace in the town of Leadville. When an entire herd of cattle destroyed and a young settler girl dies, the two lawmen must join forces, despite their differences, to look into both...and how the two crimes just might be related.

Subscribe to G.A.S.P. through Stitcher, Apple Podcasts®, Google Play®, Tune In, and RSS Feeds at http://www.graphicaudio.net/gasp

After their G.A.S.P. debut, all titles will also be available in their entirety for purchase and download along with GraphicAudio’s approximately 1000 titles at GraphicAudio.

About Graphic Audio
GraphicAudio®, A Movie in Your Mind® is an imprint of The Cutting Corporation. Since its inception in 2004, GraphicAudio® has published over 1000 titles and more than 100 different series in a wide variety of popular genres, all produced in the unique and vivid GraphicAudio® A Movie in Your Mind® audiobook entertainment format, featuring book-length full cast dramatizations richly scored with cinematic music and layered with immersive sound effects and design. GraphicAudio Story Podcast (G.A.S.P.™) is a new FREE weekly Podcast bringing you ALL-NEW serialized episodes of a complete full-length story along with episodes that feature short-stories, all presented in signature GraphicAudio® style. GraphicAudio Streams™, the new streaming subscription service launches this fall, offering numerous monthly options for the listener’s preference. You can listen to GraphicAudio productions on the go with the new version of their GraphicAudio Access App™ available for Android and Apple Devices.