Joe Kusmierczyk’s new book “I Got Divorced I Didn't Know What to Do So I Wrote a Book” is about the author’s life as a handicapped athlete, college student, and criminal.

Recent release “I Got Divorced I Didn't Know What to Do So I Wrote a Book” from Page Publishing author Joe Kusmierczyk is, according to the author, about his life as a cripple, an athlete, an outstanding student in college, and a criminal. He also explains how he faked insanity to get a disability pension because he could not deal with a changing culture, and made one million dollars. 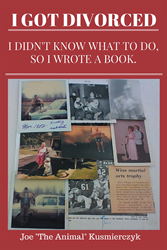 Joe Kusmierczyk, who has lived a full, interesting life, has completed his new book “I Got Divorced I Didn't Know What to Do So I Wrote a Book”: an autobiographical work filled with the highs and lows of the author, and the many unusual events that have taken place during his life.
According to Kusmierczyk, “At eight years old, my hand was run over by a train as I ran away from another gang. This was the best thing that could have happened to me—for three reasons. First, I developed a love for education. Second, I started to exercise with weights, played high school and college football, and got a black belt in karate. Third, I did not go to Vietnam.”

Published by New York City-based Page Publishing, Joe Kusmierczyk’s riveting tale revolves around his life goal to get rich any way he could.

Once he reached financial independence, he pretended to be insane to escape from the prison of corporate America. It worked, and he was placed in a forensic unit for the criminally insane and enjoyed it. The characters he met in prison and in the forensic unit were more fun to be around than anyone he had ever worked with.

After being released, he had a life a filled with hunting, fishing, and just traveling around until, according to the author, his mother was murdered by doctors to cover up their malpractice. He says he has proved the doctors murdered his mother to the county coroner and reached a settlement with the hospital. His new passion revolves around training English pointers for field trials.

Readers who wish to experience this gripping work can purchase “I Got Divorced I Didn't Know What to Do So I Wrote a Book” at bookstores everywhere, or online at the Apple iTunes store, Amazon, Kobo, Google Play or Barnes and Noble.