Recent release of Reflections on Evolution” from Page Publishing author Frederick Sproull details new scientific ideas and discoveries that have shaped, and are shaping, evolutionary theory. Also discussed are how these discoveries are transforming, contradicting, and reshaping traditional Darwinism and new synthesis evolutionary thought. 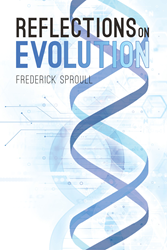 Frederick Sproull, department chair of biology and professor of evolutionary biology, population genetics, and cell biology at La Roche College, has completed his new book “Reflections on Evolution”: a scholarly exploration of Darwinism in the context of modern scientific and mainstream religious thought.

Sproull shares, “Evolution is the idea that species of living organisms can change into different species over time. In essence, the species alive today are believed to be derived from preexisting ones and to have genetic continuity with them. Evolution is change; it views the history of life as characterized by change. It rejects ancient views of nature, which see species as static, unchanging entities. However, the implications of evolution go far beyond the scope of these basic definitions. This work explores certain scientific and nonscientific factors that contributed to the development of evolutionary theory from the Enlightenment to present. Emphasis is placed on how new synthesis evolution is being revised, extended, and in some ways refuted by recent scientific advances and by developing views on how change occurs in nature.”

He concludes, “Evolution has always had wide-ranging implications; it is an idea that reverberates far beyond science. One reason for this is that it removes humans and other living organisms from the status of being directly and specially created by God. Increasingly since Darwin, evolution explains the history of life in a materialistic way, freeing biology from theological constraints on the important question of how species got here. By detaching biology from the supernatural, evolution allowed biology to become modern science.
Evolution also acts as one of the few unifying concepts in biology, bringing biology’s many disparate areas together into a cohesive scientific discipline.

Recent developments in science and technology, many in the area of molecular biology, have resulted in the emergence of a new understanding of evolutionary mechanisms and they are providing deeper insight into the unity of living organisms and how biological novelty emerges.

As incredible as these advances are, they have not silenced the religious debates that have historically been associated with evolution. These debates have continued into the twenty-first century. However, evolution is not necessarily at odds with religion. At least since Darwin, mainstream religions in the West have accommodated at least some form of it.

This work attempts to place twenty-first century evolution into a historical and ideological context. New scientific ideas and discoveries that have shaped evolution are discussed within this framework. Also discussed are how these discoveries are transforming, contradicting, and reshaping traditional Darwinism and new synthesis evolutionary thought.”

Readers who wish to experience this fascinating work can purchase“Reflections on Evolution” at bookstores everywhere, or online at the Apple iTunes store, Amazon, Google Play or Barnes and Noble.