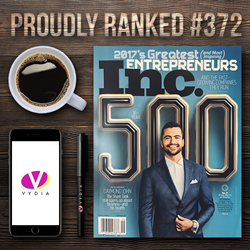 Inc. magazine today ranked Vydia No. 372 on its 36th annual Inc. 500 (and subsequently the Inc. 5000), the most prestigious ranking of the nation's fastest-growing private companies. The list represents a unique look at the most successful companies within the American economy’s most dynamic segment— its independent small and midsized businesses. Companies such as Microsoft, Dell, Domino’s Pizza, Pandora, Timberland, LinkedIn, Yelp, Zillow, and many other well-known names gained their first national exposure as honorees of the Inc. 5000.

"For Vydia to be recognized as part of the Inc. 500 Fastest-Growing Companies in America is an incredible honor," stated Roy LaManna, Vydia's Co-founder and CEO. "Our rapid growth over the past three years is directly linked to the commitment of the entire Vydia team, the innovative technology we’ve developed, and the loyal support of our platform users and investors. As we continue to stay focused on empowering content creators, this honor from Inc. Magazine shows that Vydia has emerged as a global leader in the digital rights space."

The 2017 Inc. 5000, unveiled online at Inc.com and with the top 500 companies featured in the September issue of Inc. (available on newsstands August 16) is the most competitive crop in the list’s history. The average company on the list achieved a mind-boggling three-year average growth of 481%. The Inc. 5000’s aggregate revenue is $206 billion, and the companies on the list collectively generated 619,500 jobs over the past three years. Complete results of the Inc. 5000, including company profiles and an interactive database that can be sorted by industry, region, and other criteria, can be found at http://www.inc.com/inc5000.

"The Inc. 5000 is the most persuasive evidence I know that the American Dream is still alive,” says Inc. President and Editor-In-Chief Eric Schurenberg. “The founders and CEOs of the Inc. 5000 tell us they think determination, risk taking, and vision were the keys to their success, and I believe them.

About Vydia:
Vydia is an award-winning video technology company that empowers creators to publish, protect, monetize and distribute their content on one centralized platform. Catering to an array of over 150,000 users worldwide including multi-platinum artists, social influencers, independent musicians and entertainment outlets, Vydia helps creators not only manage their video content better, but smarter. Vydia is a trusted partner of major digital publishers like Vevo, YouTube, Facebook and Dailymotion as well as networks like BET, MTV, and Music Choice. To learn more about Vydia, please visit https://vydia.com/