Film Screenings of 80 Documentary Films to be Presented October 4 to 8, 2017 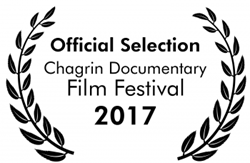 “It has been our founding mission to empower talented filmmakers. We are proud to share their stories with our enthusiastic and engaged audience.

The Chagrin Documentary Film Festival will screen 80 films during its eighth annual event October 4th-8th, 2017 at venues in and around Chagrin Falls. The selected documentaries represent the work of filmmakers from 28 countries and focus on a wide range of thought-provoking topics. The Chagrin Valley Chamber of Commerce is the 2017 presenting sponsor of the Festival .

The Chagrin Documentary Film Festival has been named one of Movie Maker Magazine’s Top 50 Film Festivals Worth the Entry Fee for the fifth year in a row. The magazine credits the remarkable welcome which the Festival and entire community extends to visiting film directors.

Special Presentations:
“We have invited these films to screen at the festival because of the important issues our society is facing and the noteworthy impact of bringing these stories to Northeast Ohio.”, said Festival Director Mary Ann Ponce, who founded the festival in 2010 to honor her son, David. “We are honored to be welcoming the directors, Colin Hanks, and three time Academy Award nominee, one time winner, Thomas Lennon to attend the Festival this year.” Special presentation films include: All Things Must Pass - Directed by Colin Hanks (USA); Eagles of Death Metal: Nos Amis (Our Friends) – Directed by Colin Hanks (USA/ France); Sacred - Directed by Thomas Lennon (Ethiopia, USA, Egypt, Ukraine, Sierra Leone, Japan, Philippines, France, Canada, Madagascar, Pakistan).

Film buffs will be able to choose documentaries from 10 categories this year. They include:

Emerging Filmmaker:
“This category reflects our commitment to giving a voice to the first time filmmaker,” said Ponce. “It has been our founding mission to empower talented filmmakers. We are proud to share their stories with our enthusiastic and engaged audience.” The films include: Lunatic - Directed by Kent Allison (Canada); Oleg’s Choice - Directed by Elena Volochine, Co-Director James Keogh (Ukraine and France); Running on Empty - Directed by Joey Dwyer and Timmy Dwyer (USA); When I Stutter – Directed by John Gomez (USA); Wine Diamonds: Uncorking America’s Heartland - Directed by Bradley Johnson (USA).

Human Spirit:
This category celebrates stories of those who are met with seemingly insurmountable challenges, and yet overcome. They are meant to inspire all of us.The films include: Adele and Everything After – Directed by Melissa Dowler (USA); American Veteran - Directed by Julie Cohen (USA); Five Awake - Directed by Susan Willis, Donna Dees (USA); The Last Freedom Train – Directed by Jim Hacha (USA); Nana - Directed by Serena Dykman (USA).

Local Interest:
The stories which focus on our own backyard, Ohio, will engage local history buffs or just those filmgoers who are proud of their home state. These films include: Blimp! Sports, Broadcasting and the Goodyear Airship – Directed by Kathleen Endres (USA); Breaking Balls - Directed by
John Vourlis (USA); Burn the Ships - Directed by Danielle Miller, Julia Thorndike (USA); Grove Hill: A True Story - Directed by Molly Gebler (USA); Knife Skills - Directed by Thomas Lennon (USA).

Student Films:
Ponce said this category is especially close to her heart, since it is made up of aspiring filmmakers searching for an audience. They are directed by high school, college and post-graduate students, and include: Code Yellow - Directed by Erica Jacques (USA); The Impact Point - Directed by Sydney Guthrie (USA); The Sandman - Directed by Lauren Knapp (USA); Searching for Sugihara - Directed by Adam Gross (USA).

Mockumentaries:
For the first time, the Festival is presenting Mockumentary films. A mockumentary film takes the form of a serious documentary in order to satirize its subject. Films presented this year include: And the Earth Will Be Lost to the Flames – Directed by Adam Bertocci (USA); Auto Fist: The Last Aldous Movie - Directed by Jeffrey Lange (USA); Black Cat - Directed by Peter Pardini (USA); King Bloodsucker - Directed by Hollie Brubaker (USA); Man Child of the Kitchen - Directed by Eric Bissell (USA); The Wenis Report - Directed by Molly Gebler and Theo Hawk (USA).

To become a Festival sponsor, volunteer, or to learn more about the Film Festival’s schedule and activities, visit http://www.chagrinfilmfest.org. For more information, contact: Chagrin Documentary Film Festival at 440-247-1591or at chagrindocfest(at)gmail.com.