Researchers at Tokai University describe in Advanced Materials how wrapping biological tissue in a nanosheet of a particular organic material results in high-quality microscopy images. Application of the wrap prevents the sample from drying out, and hence from shrinking, enabling larger image-recording times. 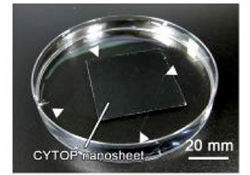 In order to fully understand how biological cells function, it is important to be able to visualize them in their environment, on long-enough timescales and with high-enough resolution. However, typical setups for studying a biological tissue sample by means of optical microscopy do not prevent the sample from drying out, making it shrink during observation, resulting in blurred images. But now, a team of researchers led by Yosuke Okamura from Tokai University, has discovered how to overcome this problem: wrapping the sample in a fluoropolymer nanosheet preserves its water content, and the sheet’s strong adhesion makes it mountable.

The researchers, who were inspired by the use of plastic food wrap, investigated the wrapping properties of a fluorine-containing polymer known as CYTOP®, a stiff but stretchable and highly optically transparent material. They first confirmed that due to its high water-repellency, a nanosheet of CYTOP® floats on water, even after adding a surfactant. Scanning-electron-microscopy observations revealed that the nanosheet is flat and free of cracks or wrinkles.

As a first test of CYTOP® as a wrapper material for biological tissues, the researchers coated a cylindrically shaped alginate-hydrogel — an easily formable biomaterial — sample in a CYTOP® nanosheet, and monitored the evolution of its water content. They found that after 24 hours, 60% of the original water content was still present. (A similar sample left unwrapped in air became totally dehydrated after about 10 hours.) Through experimenting with various thicknesses, the scientists discovered that the nanosheet’s water-retention capability increases proportionally with its thickness. They concluded that a 133-nm-thick sheet offers sufficient surface adhesion (necessary for fixing the sample) and water retention.

The researchers then performed experiments with an actual biological sample: 1-mm thick brain slices from mice, exhibiting enhanced expression of yellow fluorescent protein for visualisation purposes. Without applying a CYTOP® wrap, evaporation of the embedded water caused local, non-uniform sample shrinkage, leading to a blurred image. By wrapping the brain slices in a CYTOP® nanosheet, however, images with a high spatial resolution could be obtained from scanning a large area (more than 750 µm x 750 µm) over a long time (about 2 hours).

The scientists noted, however, that for observations over longer time spans shrinkage will occur. This effect can be compensated by embedding the sample with agarose, a gel-forming material, providing a stability matrix — a technique already used for mounting biological tissues for microscopy observations. The wrapping technique of Okamura and colleagues is still at an early stage, but, as the researchers point out, it “establishes and verifies the superiority of nanosheet wrapping mounts for tissue imaging”.

CYTOP®
Yosuke Okamura from Tokai University and colleagues tested an organic compound, known by its commercial name ‘CYTOP®’, as a wrapper for biological tissue samples for improving the quality of the observation of such samples in a microscope. CYTOP® is a fluoropolymer — a chain of monomers containing fluorine. Its structure is amorphous, meaning that the polymers do not arrange into a crystal lattice. It has good hydrophobicity, transparency and adhesion strength, resulting in water retention of a tissue sample when wrapped in a nanosheet of CYTOP®, preventing the sample to dry out, which would cause the recorded microscopy image to blur.

About Tokai University
Tokai University is a private university established by Shigeyoshi Matsumae in 1942.
"Tokai" of "Tokai University" refers to the sea to the east of Asia, namely the Pacific Ocean, and symbolizes the desire to foster the kinds of big hearts, rich spirits, and broad perspectives symbolized by the expanse of an ocean.
The white cross of the school flag symbolizes "Love" and "Justice," and expresses the presence of "Truth" where love and justice meet.
The Tokai University Educational System is one of the largest general education and research institutions in Japan today. To seek mutual understanding and global peace through the education of, and interaction with, young scholars from around the world, we began accepting foreign students from at early stage and have consistently promoted Japanese-language education.