Ticomix has made Inc. magazine's Honor Roll as a five-time Inc. 5000 honoree. This multiyear recognition has only been achieved by a small portion of honorees since the list began. 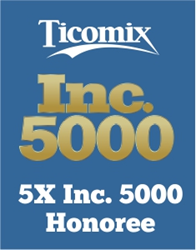 "To me this validates the tremendous amount of work our people have done to provide the best service we can to our customers and to generally be a great place to work." –Tim Ancona, Ticomix CEO

(Rockford, IL) August 16, 2017— Inc. Magazine announced this week, for the fifth consecutive year, that Ticomix has been named on its annual Inc. 500|5000 list, placing it on the Honor Roll of this exclusive ranking of the nation’s fastest-growing private companies.

Only 908 companies have appeared five times on the list (not necessarily consecutively) according to the most recent data published on Inc.'s website.

The list represents a comprehensive look at an important segment of the economy—America’s independent entrepreneurs. Companies such as Microsoft, Dell, Domino’s Pizza, Pandora, Timberland, LinkedIn, Yelp, Zillow, and many other well-known names gained their first national exposure as honorees of the Inc. 5000.

"To me this validates the tremendous amount of work our people have done to provide the best service we can to our customers and to generally be a great place to work," said Ticomix CEO Tim Ancona.

The 2017 Inc. 5000, unveiled online at Inc.com and with the top 500 companies featured in the September issue of Inc. (available on newsstands August 16) is the most competitive crop in the list’s history.

"The Inc. 5000 is the most persuasive evidence I know that the American Dream is still alive," says Inc. President and Editor-In-Chief Eric Schurenberg. "The founders and CEOs of the Inc. 5000 tell us they think determination, risk taking, and vision were the keys to their success, and I believe them."

The average company on the list achieved a three-year average growth of 481%. The Inc. 5000’s aggregate revenue is $206 billion, and the companies on the list collectively generated 619,500 jobs over the past three years. Complete results of the Inc. 5000, including company profiles and an interactive database that can be sorted by industry, region, and other criteria, can be found at http://www.inc.com/inc5000.

ABOUT TICOMIX:
Ticomix provides technology solutions to businesses by fusing best practices with award-winning technologies in the areas of networking, data backup/recovery, service desk management and a host of other customized software and hardware solutions. Ticomix is a Microsoft Gold Partner, Cisco Premier Partner, and a ServiceNow Silver Partner. They are headquartered in Rockford, IL, with offices in New York, Florida and Wisconsin. For more information, visit http://www.ticomix.com or call 815-847-3400.

Inc. Media:
Founded in 1979 and acquired in 2005 by Mansueto Ventures, Inc. is the only major brand dedicated exclusively to owners and managers of growing private companies, with the aim to deliver real solutions for today's innovative company builders. Winner of the National Magazine Award for General Excellence in both 2014 and 2012. Total monthly audience reach for the brand has grown significantly from 2,000,000 in 2010 to over 18,000,000 today. For more information, visit http://www.inc.com.

Inc. 5000:
The Inc. 5000 is a list of the fastest-growing private companies in the nation. Started in 1982, this prestigious list of the nation's most successful private companies has become the hallmark of entrepreneurial success. The Inc. 5000 Conference & Awards Ceremony is an annual event that celebrates their remarkable achievements. The event also offers informative workshops, celebrated keynote speakers, and evening functions.

List Methodology:
The 2017 Inc. 5000 is ranked according to percentage revenue growth when comparing 2013 to 2016. To qualify, companies must have been founded and generating revenue by March 31, 2013. They had to be U.S.-based, privately held, for profit, and independent—not subsidiaries or divisions of other companies—as of December 31, 2016. (Since then, a number of companies on the list have gone public or been acquired.) The minimum revenue required for 2013 is $100,000; the minimum for 2016 is $2 million. As always, Inc. reserves the right to decline applicants for subjective reasons. Companies on the Inc. 500 are featured in Inc.'s September issue. They represent the top tier of the Inc. 5000, which can be found at http://www.inc.com/inc5000.