Recent release “Coffee and Cupid” from Page Publishing author Elizabeth Pulliam is both telling and emotional; this story follows the 70-year-long love story of Drewey Pulliam and Elizabeth Garzio. 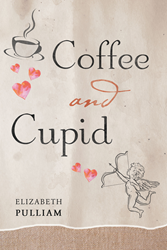 Drewey had first purposed to Elizabeth when he was a young soldier during World War II. Injured during the war and suffering with malaria, Drewey was reluctant to burden young Elizabeth with his problems so he broke off the engagement. They both ended up marrying other people, and raising families with their new spouses.

In December 2011, both were single again and Cupid’s arrow once again found its mark. Elizabeth’s daughter, also named Elizabeth, contacted Drewey’s son Ray, and on January 7, the couple re-connected. During a visit in June, Drewey proposed once again, only to be rebuffed initially by Elizabeth. She had after all been married for some 65 years previously and wasn’t interested in more married life. Drewey persisted and when he proposed again a month later she relented.
Their story began in 1942, when 15-year-old Elizabeth and her friends want to volunteer at the local USO. Though she wasn’t old enough to volunteer, her friends encouraged her to lie about her age. She did the patriotic thing and volunteered.

She was put on the coffee line because it was “one of the easier jobs.” She remembers Drewey coming up three separate times for coffee in that first fateful evening She suspected that he was desperately shy but wanted to talk to her. After doling out Drewey’s third serving of coffee Elizabeth decided to investigate more closely. She told her friends about the young man’s mysterious fondness for coffee and they advised her to take the initiative if he came up again.
Fortunately, Drewey did come up for his fourth cup, at which point the young Elizabeth broke the ice. Soon after, the young Elizabeth excused herself from her vending duties and the young couple sat down to talk. Drewey Pulliam was clearly smitten that evening and after a while invited his young lady to the movies. Elizabeth now recalls, “we went to the movies the following Saturday even though I was not supposed to date at the age of 15.”

The bride had set her heart on getting married in Cranbury. David Cook, Cranbury’s genial Mayor bent the rules for the couple (who were not at this point residents of Cranbury). He officiated at a simple ceremony which was held at the Gazebo in Village Park not far from the 34 Maplewood Avenue home where the young Elizabeth had once lived. The picturesque Village Park overlooks Brainerd Lake where the young couple had once swum. The weather was gorgeous and the still handsome couple finally wed supported by family and close friends.

Readers who wish to experience this enthralling love story can purchase “Coffee and Cupid” at bookstores everywhere, or online at the Apple iTunes store, Kobo, Amazon, Google Play or Barnes and Noble.