Recent release “The Taborie Team Incident: A Kyle Galen Adventure” from Page Publishing author Wayne Michaels is the suspenseful story of a brilliant sixteen-year-old resident of an interplanetary space station who embarks with his friends on a covert mission to learn the reasons behind the cancellation of a much-anticipated exploratory operation. 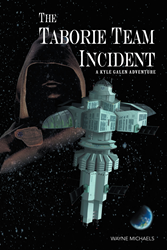 Wayne Michaels, a lifelong sci-fi buff who lives in Battle Creek, Michigan, with his wife, daughter, and cat, has completed his new book “The Taborie Team Incident: A Kyle Galen Adventure”: a riveting futuristic mystery bringing a space station and its fascinating inhabitants to life.

Unknown forces cause the shutdown of the team. When sixteen-year-old Kyle Galen learns of the dissolution of the newest exploration unit since the near destruction of Earth during World War III, he naively takes it upon himself to find out why.

It has been his lifelong dream to join the team and explore the unknown reaches of space, so he recruits three of his friends to investigate, unaware of the dangers they all face.

Those dangers and the fact that their parents can ground them for life are only two of the obstacles that stand in the way of Kyle and his friends of solving the mystery of the Taborie Team Incident.

On Space Station Volition, Kyle Galen had turned sixteen and had hopes and dreams of his own that he wished to pursue. A new program that rekindled the vision of space exploration, which had been in limbo almost since the last manned space flights in 2016 and the then-experimental colonization of Mars in 2023, had been formed. Like his parents, Kyle hoped for something better, and though he was not completely unhappy, he was looking for some- thing different, a way to get away from this place he called home, and was almost obsessively determined that the Taborie Exploration Team would be his way out.

Readers who wish to experience this science fiction fantasy can purchase“The Taborie Team Incident: A Kyle Galen Adventure” at bookstores everywhere, or online at the Apple iTunes store, Amazon, Google Play or Barnes and Noble.