Embracing the Past with the Vintage Native American Style

NativeAmericanJewelry.com gets back to their roots by launching a collection of jewelry from their Native American artists that adhere to the old styles that have become so prevalent in 2017. 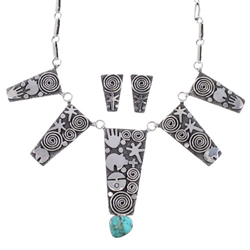 There’s no question about that fact in the Southwest, but many high-end fashion designers are starting to see the light and that’s why we’ve decided to launch a collection that brings back the original inspiration, . . .

NativeAmericanJewelry.com’s Turquoise Jewelry Gallery boasts an excellent collection of pieces from artists of the Zuni, Hopi, and Navajo tribes that hearken back to the styles of the 60’s and 70’s, when Southwest and Native American jewelry gained a foothold in the fashion industry and became a staple of American culture.

The new collection includes some of the most popular styles of the era, including turquoise necklaces, earrings, pins, pendants, rings, and belts. The spokesman of NativeAmericanJewelry.com, Steven Onida, also gave a few words about the new release.

“We often see Native American culture as separate from our own, but it has influenced the flow of this country in many ways that people take for granted. One such way is in art and fashion. There’s no question about that fact in the Southwest, but many high-end fashion designers are starting to see the light and that’s why we’ve decided to launch a collection that brings back the original inspiration, in a sense."

Visitors can enjoy the original craftsmanship from these Native American artists, as they incorporate symbols and patterns that are unique from their unique tribes. These pieces stay true to the appeal of vintage Native jewelry and use gemstones like turquoise, coral, and sterling silver to make stunning examples of art and jewelry.

The new collection of vintage-style Native American jewelry focuses primarily on turquoise pieces but also goes into coral, sterling silver, and a few other stones found commonly in Native art.

If anyone is looking for a great piece or a nice gift to give someone, Onida encourages people to see the wonderful creations made by these Native American artists.