Author Burnett King Sr.’s newly released “Three Narrow Roads” is a look into the journey of life with the destination of salvation

“Three Narrow Roads” from Christian Faith Publishing author Burnett King Sr. is the life journey of the Dr. Rev. Burnett King Sr. and the author’s choice to take the higher road along the way. 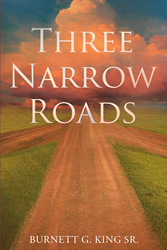 “Three Narrow Roads”: a vivid and provocative look into the narrow path toward god. “Three Narrow Roads” is the creation of published author, Rev. Dr. Burnett King Sr., is currently the pastor-teacher-visionary at Simply the WORD Church, a global prayer ministry and the head coach and founder of the Faith Track Club, Inc., a track-and-field program geared towards youth.

King shares, “When I take time to think about the character of those we spent most of our time with, it becomes very clear to me that even being somewhat unconscious of it back then, I was drawn towards those who were like-minded in an effort to be serious about this life. Those other persons were Richard London Jr. and Yolanda Wilson, who were also classmates of ours—with Yolanda and I going on to attend and graduate from Grambling State University in Grambling, Louisiana; Calvin going on to attend and graduate from Jackson State University in Jackson, Mississippi; and Richard going on to enlist in and complete tenure with the United States Air Force. Simply put, we were serious about life, and we migrated towards one another because we all had this in common.”

Published by Christian Faith Publishing, Burnett King Sr.’s new book chronicles the author’s narrow path that led to god and what it means to others. In the author’s personal experience, the right road is hard to find as not all paths are ones meant to be traveled.

In life people are presented a series of choices and must make decisions that have various consequences, through the teachings of the bible Dr. Rev. King Sr. shares the wisdom that led to eternal life. In the book, the roads that one can take are examined to show readers the right path toward salvation.

View a synopsis of “Three Narrow Roads” on YouTube.