“One of His Flock” from Christian Faith Publishing author Wilbert Knittel is the tale of a shepherd boy named Michael. When Michael joins his father and their flock of sheep on a journey to greener pastures, he expected an adventure, but not the one he stumbles upon. 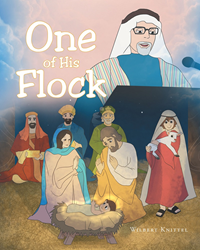 “One of His Flock”: the heart-wrenching, heartwarming tale of Michael the shepherd boy. “One of His Flock” is the creation of published author, Wilbert Knittel, artist, poet and songwriter. Wilbert Knittel has appeared on Cleveland area stages numerous times. He has also performed as a cantankerous 100-year old lady on radio for some time. His photographs have won awards statewide while they have been sent to President Bush, President Clinton and many other public officials.

“You'll feel the love, that opens his eyes, there's bright lights, music, angels and more, And a heart-wrenching ending that you've waited for, So, to enjoy all these feelings that all of us need, just pick up this book, now sit down and read.” --Wilbert Knittel

“One of His Flock” is the story of a young shepherd boy named Michael and his first outing as a shepherd. Silent, yet filled with joy, Michael sets out with his father and their flock of sheep. As his journey progresses, Michael encounters a wolf and a big surprise. “One of His Flock” is a heart-wrenching story filled with love, bright lights, music, angels and so much more.

View a synopsis of “One of His Flock” on YouTube.

Consumers can purchase “One of His Flock” at traditional brick & mortar bookstores, or online at Amazon.com, Apple iTunes store, Kobo or Barnes and Noble.

For additional information or inquiries about “One of His Flock”, contact the Christian Faith Publishing media department at 866-554-0919.