Georgia State University has introduced programs for students interested in eSports, organized multiplayer video game competitions that are often broadcast, and which have spurred the development of collegiate teams at institutions across the United States. 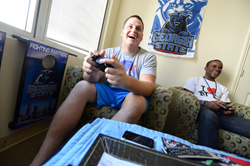 Georgia State University has introduced programs for students interested in eSports, organized multiplayer video game competitions that are often broadcast, and which have spurred the development of collegiate teams at institutions across the United States.

The university has joined the National Association of Collegiate eSports (NACE) and its 33 affiliated varsity eSports programs (scholarship granting NACE universities include UC-Irvine, Western Kentucky University and the University of Utah). Georgia State students will be eligible to compete for team positions in competitions that will happen in early September.

Georgia State is also among Georgia universities starting the Georgia Esports League (GEL), which begins tournament play in September 2017. Along with Georgia State, students from Georgia Institute of Technology, Kennesaw State University, the University of North Georgia and others will compete in the games “Paladins” and “Brawlhalla.”

Beyond game play, the eSports efforts include student participation in broadcasting, production and marketing of eSports and tournaments, coaching, student management and game development.

“The skills developed by eSports-interested students are the very skills most needed for success in the 21st century economy, including collaborative soft skills and computer coding,” said David Cheshier, director of the Georgia State Creative Media Industries Institute. “We see this initiative as building essential links to emerging creative careers in animation, 3D and immersive world creation, and other media industries.”

“We’re excited to welcome Georgia State University to NACE,” said Michael Brooks, NACE executive director. “Georgia State represents our second institution in as many weeks to join out of the state of Georgia. I’m certain their leadership in eSports will serve as the model of varsity eSports in the southeast for decades to come.”

“We are honored that Georgia State has become one of the Georgia Esports League’s inaugural members,” said Andrew Greenberg, president of the Georgia Game Developers Association, the organization sponsoring GEL. “This gives its students the chance to earn both scholarships and internships, as well as compete with varsity college teams around the state. Georgia State clearly recognizes its students’ interest in eSports. We have no doubt this means even more smart, talented students applying to the university.”

Georgia State will offer fall orientation sessions and competitions that will fill team slots with the most talented players. The university will start this fall by connecting students to League of Legends and Smite competitions, but students playing on other platforms are also encouraged to join.

In 2016, more than 90 million viewers watched eSports tournament finals. The tournaments are often televised, in much the same way as physical sports are, and streamed online, with competitors reaching for millions in prizes at some tournaments.

“ESports are both the most rapidly growing field of sports and also one of the best ways to get students interested in technology,” Greenberg said. “Georgia State has become one of the first schools to recognize the link between eSports and academic achievement. We are delighted both with its role as one of the Georgia Esports League’s inaugural members and the opportunities it is providing its students.”