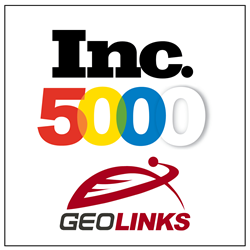 “It’s crazy to think that I started GeoLinks out of my home in Ojai, California back in 2011. However, even from the beginning, I've always known that we'd go big and disrupt the industry.

Inc. magazine today ranked California Internet L.P. dba GeoLinks NO. 604 on its 36th annual Inc. 5000, the most prestigious ranking of the nation's fastest-growing private companies. The list represents a unique look at the most successful companies within the American economy’s most dynamic segment— its independent small and midsized businesses. Companies such as Microsoft, Dell, Domino’s Pizza, Pandora, Timberland, LinkedIn, Yelp, Zillow, and many other well-known names gained their first national exposure as honorees of the Inc. 5000.

Since inception in 2011, GeoLinks has consistently achieved more than 300% growth in yearly annual revenue. While GeoLinks places 604 on the list overall, the company earned 5th place for Fastest Growing Telecommunications Companies, and 2nd place for Internet Service Providers.

“Myself, and the entire GeoLinks’ team, are thrilled to have achieved this incredible recognition,” said GeoLinks’ CEO Skyler Ditchfield. “It’s crazy to think that I started GeoLinks out of my home in Ojai, California back in 2011. However, even from the beginning, I've always known that we'd go big and disrupt the industry. While many have congratulated our success along the way, I’ve always known that the best is yet to come. We're on track to grow another 100%+ this year, and plan to maintain this trajectory for the next five years, and beyond. I want to thank the entire GeoLinks team for their outstanding contributions in accomplishing this company milestone. Without each and every one of their hard work, dedication, and passion for innovation, we wouldn’t have gotten to where we’re standing today.”

The 2017 Inc. 5000, unveiled online at Inc.com is the most competitive crop in the list’s history. The average company on the list achieved a mind-boggling three-year average growth of 481%—although, GeoLinks smashed the average with a three-year sales growth of 748%. The Inc. 5000’s aggregate revenue is $206 billion, and the companies on the list collectively generated 619,500 jobs over the past three years. Complete results of the Inc. 5000, including company profiles and an interactive database that can be sorted by industry, region, and other criteria, can be found at http://www.inc.com/inc5000.

For media inquiries or to schedule an interview with GeoLinks’ CEO Skyler Ditchfield, please contact Lexie Olson at lolson(at)geolinks.com.

Founded in 2011 by CEO, Skyler Ditchfield, and CTO, Ryan Hauf, GeoLinks is the fastest growing B2B fixed wireless ISP in California. Proud to service the largest coverage area of any single fixed wireless provider in the state, GeoLinks expanded its territory in 2017 delivering enterprise-grade internet, layer 2 transport, and turnkey construction expertly tailored for all business and Anchor Institutions nationwide.

Amongst its many accolades, GeoLinks was the largest construction grant winner for California K-12 schools and libraries in both 2016 and 2017. Servicing thousands of businesses across the country, GeoLinks officially became a CLEC and public utility in 2017.

For more information on Inc. and the Inc. 5000 Conference, visit http://conference.inc.com/.