ReviMedia Ranked on the Inc. 5000 List for Fourth Consecutive Year 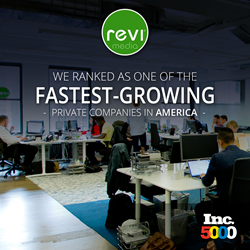 ReviMedia named on the Inc. 5000 List for 4th Consecutive Year

"It’s an honor and a testament to the dedication and hard work of our team to make this list for the fourth year" - Frans van Hulle, ReviMedia CEO

The New York based company is ranked among the top 25 in Advertising and Marketing within the New York City Metropolitan Area and is one of two New York companies within the category to be listed for the fourth consecutive year. “It’s an honor and a testament to the dedication and hard work of our team to make this list for the fourth year,” said ReviMedia CEO, Frans van Hulle.

ReviMedia prides itself on being one of the industry’s most transparent lead generation companies. It has impacted multiple vertical marketing sectors and is now utilized by over 300 leading advertisers in the insurance, home services, and mortgage industry. The company is also expanding its presence into the education, entertainment, membership services, and sweepstakes verticals.

About ReviMedia
ReviMedia is a fast-growing performance marketing company offering sophisticated lead generation and lead exchange solutions to clients across multiple verticals, including insurance, financial services, and home services. ReviMedia’s competitive advantage is its proprietary platform, which has resulted in its sister company, PX. ReviMedia is headquartered in New York, NY with offices in The Netherlands, Ukraine and Panama. For more information, please visit https://www.revimedia.com and https://www.px.com.