Hotel review website Oyster honored The Landing Resort & Spa in South Lake Tahoe, California, with a spot on its Top 10 Best Lakeside Hotels in the U.S. list. Oyster calls ultra-luxe Lake Tahoe boutique hotel The Landing “one of the most-chic options” in the U.S. that “wholeheartedly embraces its lakeside setting.” 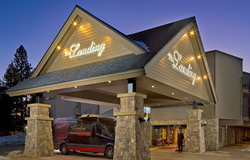 A luxury oasis on Lake Tahoe’s southern shores, The Landing Resort is a year-round destination, with numerous amenities and nearby activities for an award-winning stay.

“The real treat here is how the hotel wholeheartedly embraces its lakeside setting,” writes Oyster.

Unparalleled views and a chic setting are among the many appealing attributes cited by Oyster when the popular “hotel tell-all” website recently named The Landing Resort & Spa in South Lake Tahoe, California, to its roster of the 10 Best Lakeside Hotels in the U.S.

In its best lakeside hotels list, Oyster refers to The Landing – Lake Tahoe’s only five-star boutique lakeside resort – as “a handsome option for those seeking easy water access and amazing landscape views,” and praises such amenities as the patio fire pits with lake views and free beach access. In addition, Oyster – known as the world’s most comprehensive reviewer of hotels – writes of The Landing that “the real treat here, though, is how the hotel wholeheartedly embraces its lakeside setting.”

This is the second time this year that Oyster has chosen to showcase The Landing, following closely on the heels of its naming the luxury getaway to an exclusive roster of the Best Hotels in California and Best Luxury Hotels in the United States. The site, which also gives the resort its highest “5-pearl” rating, explains its process: “We've scoured the hundreds of lakeside hotels that we've visited to come up with a list of the 10 best we've found so far.”

“We are delighted and humbled to receive such meaningful and favorable feedback,” says Henri Birmele, General Manager of The Landing. “Each day, we strive to offer our guests a welcoming and pampering experience that goes above and beyond in catering to their every need, and it is rewarding to have those efforts recognized.”

Since opening in 2013, the Landing has repeatedly been honored as a year-round dream destination. Situated adjacent to Lakeside Beach and within easy walking distance to the marina, this premier resort proves that it indeed “embraces its lakeside setting” by offering an abundance of amenities and an endless array of nearby activities for guests to enjoy. In summer, guests can golf, hike and bike, as well as boat or kayak, fish, wakeboard, waterski and paddle board. Popular and picturesque Emerald Bay, just 15 miles down the road, also offers the full range of water sports.

In addition, The Landing’s proximity mere blocks from Heavenly Village and the gondola to Heavenly Mountain Resort means winter fun, too – including skiing and snowboarding (alpine and cross-country), snowmobiling, dogsledding and sleigh rides, along with many of the same lake-based activities offered in the summer.

Guests can then return to their lavishly and individually decorated rooms, referred to by Oyster as “sumptuous, colorful, and tasteful,” each one cozy yet spacious and sporting stone-lined gas fireplaces and private balconies, most with lake and mountain views. Or it might be time to relax with a signature treatment in the inviting full-service spa, followed by a Mediterranean-influenced repast at Jimmy’s, the elegant and comfortable on-site restaurant. This romantic space – recently lauded as a South Lake Tahoe Best Hotel Restaurant and Best Fine Dining on the South Shore in Tahoe Quarterly – serves three meals daily and is a top spot for cocktails around those outdoor deck fire pits, with their views of the lake and its backdrop of the majestic Sierra Nevada mountains.

In addition to the recognition from Oyster, in 2016 The Landing Resort was ranked #1 in Condé Nast Traveler’s Readers’ Choice Awards for Top Northern California Hotels. The Landing also has been the recipient of four TravelWeekly Gold Magellan Awards, as well as the Luxury Travel Guide’s Luxury Resort and Spa of the Year 2016 and Haute Grandeur’s Best Resort Spa – North America.

About The Landing Resort & Spa
The Landing Resort & Spa offers award-winning contemporary European room design with stone fireplaces, ultra-luxurious bathrooms and spectacular lake views. Amenities include Jimmy’s Restaurant, providing gourmet dining, and the Spa at The Landing’s full menu of treatment options. Walking distance to the nightlife, dining and shopping of South Lake Tahoe and just blocks from Heavenly Gondola and Village Center, The Landing provides complimentary transportation locally and bicycles for cruising around town. One of only two U.S. hotels on TripAdvisor’s list of 10 top lakeside hotels worldwide, The Landing opened in December 2013 and has received accolades from media including The New York Times, SKI magazine, Robb Report and USA Today. For additional information and reservations contact 855.700.5263 or visit http://www.thelandingtahoe.com.

A perfect venue for weddings, conferences or just enjoying the view, The Landing’s rooftop deck emphasizes the resort’s close connection with sparkling Lake Tahoe from its South Lake Tahoe location.

Perfect for a Tahoe ski getaway, The Landing Resort & Spa is just blocks from the gondola for the Heavenly ski area, known for its remarkable lake views (photo courtesy of Heavenly Mountain Resort).