Travis Manion Foundation kicks off new PSA in wake of tragedy and division, asking “What does your character look like?” 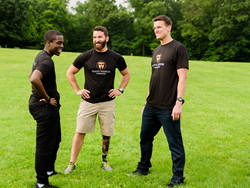 “The message we wanted to convey with this campaign is that true character is revealed through the actions we all take, each and every day. We can't reach out and touch character of course, but we can know it, and we can see it."

Travis Manion Foundation (TMF), one the nation’s leading veterans advocacy and character organizations, launched a new campaign called “Character Revealed” with a 60-second public service announcement recognizing the veterans and families of the fallen who join with inspired civilians throughout the country to strengthen and redefine our nation’s character through community engagement. The new campaign is especially timely given the tragic events in Charlottesville, VA this past weekend. The video will be airing throughout the year across all of Comcast’s markets, thanks to nearly $4 million worth of ad time generously donated by the cable provider.

“The message we wanted to convey with this campaign is that true character is revealed through the actions we all take, each and every day. We can't reach out and touch character of course, but we can know it, and we can see it. We know it in all the little decisions we make and we readily sense it in the ways we lead, serve, bounce back from challenges, and connect with one another. With the specter of the Charlottesville and further division haunting our nation, the questions we ask in the ad, ‘What does your character look like? Does it hold true to the values you uphold? Does it stand out by standing up? Does it make good on good intentions?’ are more important now than ever before.”

Manion added, “We’re proud to unveil our new PSA, both for this message and for the fact that it features real members of our own Spartan Community who exemplify my brother's words, "If Not Me, Then Who..." These individuals are veterans and families of the fallen who are leading the charge, along with inspired civilians, to redefine our nation’s character. It’s a challenge to all Americans, to think about what their own character looks like, and then to join our movement to show the world exactly what they’re made of.”

Here is the list of heroes featured in the “Character Revealed” PSA:

●    Red Ramos: An Afghanistan War veteran, Red Ramos, subscribes to a philosophy of “success through struggle.” After stepping on an IED and losing his leg in 2011, Ramos has consistently found opportunities to thrive, including competing in The Warrior Games and CBS’s Amazing Race.

●    Chris Diaz: From rehabilitating homes for the disadvantaged in the Caribbean to serving as a U.S. Navy Corpsman, Diaz continues his commitment to service and inspires a sense of character that makes an impression.

●    Pam Zembiec: Widow of Major Douglas Zembiec (USMC) who was killed in Baghdad, Zembiec tirelessly works to instill the values and bravery of her late husband in their daughter.

●    Gregory Damas: Damas is a next-generation leader who has shown his commitment to improving the North Philadelphia community through service projects. He was named TMF’s 2016 “If Not Me, Then Who…” scholarship recipient.

●    Honor Borek: Another next generation leader, Borek strives to live by the example of her mother, TMF President Ryan Manion.

TMF empowers veterans and families of fallen heroes to develop character in future generations. In 2007, 1stLt Travis Manion (USMC) was killed in Iraq while saving his wounded teammates. Today, Travis' legacy lives on in the words he spoke before leaving for his final deployment, "If Not Me, Then Who..." Guided by this mantra, veterans and survivors continue their service, develop strong relationships with their communities, and thrive in their post-military lives. As a result, communities prosper and the character of our nation's heroes live on in the next generation.