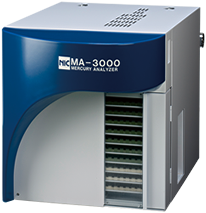 Oil shale is an organic-rich ﬁne-grained sedimentary rock containing kerogen, a solid mixture of organic chemical compounds from which liquid hydrocarbons known as shale are produced. Shale oil can be used as a substitute for conventional crude oil. Extracting shale oil from oil shale, however, is costlier and has greater environmental impact than production of conventional crude oil.

Research has shown that many shale deposits are high in mercury and that signiﬁcant quantities of mercury can be released during oil shale processing. Mercury also presents numerous issues for downstream reﬁneries beyond the environmental impact, such as detriment to the reﬁning process through amalgamation with other metals, poisoning of catalysts, and liquid metal embrittlement.

Mercury is also dangerous to both natural ecosystems and humans as it is highly toxic, especially in its ability to damage the central nervous system. To prevent both mercury poisoning and damage to the reﬁning infrastructure, it is therefore necessary to accurately quantify total mercury in shale oil.

For the analysis described in the report, calibration was done using certiﬁed aqueous ionic-mercury standard solution diluted to the required concentration.

The results show that the instrument is able to reproduce good standard addition recovery of shale oil and analyzes the samples with accuracy and precision, demonstrating the ability of the MA-3000 analyzer to meet increasing laboratory demand for simple, fast and precise mercury measurements.

A copy of this report may be requested at shar-nic(at)rigaku(dot)co.jp