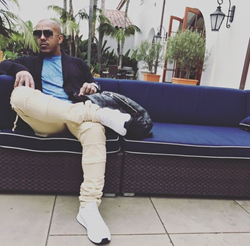 Singer, songwriter MARQUES HOUSTON, released his latest single today exclusively on iTunes, titled “Together,” from the soundtrack for the upcoming film, ‘TIL DEATH DO US PART, which will be in theatres on September 29. The triple threat entertainer co-wrote and produced the film and is now adding his musical talent with new songs for the film’s soundtrack. Produced by iRich, the brand new single “Together” is Houston’s first track to drop since 2016. He wrote and sang a second song for the soundtrack titled “See You Again” which is set to release when the the full soundtrack becomes available on September 22. Also included are other songs from the film by artists including Mila J., Chrissy, J-Boog & more.

‘TIL DEATH DO US PART, starring Taye Diggs, Annie Ilonzeh and Stephen Bishop, is a suspenseful thriller about a young woman's struggle to escape a violent marriage. The film was directed by Christopher B. Stokes, and written by Marques Houston and Stokes. Check out the official ‘TIL DEATH DO US PART trailer here.

R&B singer, songwriter, and actor, Marques Houston began his career as a member of the R&B singing group Immature/IMx eventually going solo in 2003. His latest album, “Famous” debuted in August of 2013. Marques most recently joined production company Footage Films as CEO and producer alongside founder Christopher B. Stokes.

‘TIL DEATH DO US PART soundtrack track listing includes:

For more info on ‘TIL DEATH DO US PART please visit: