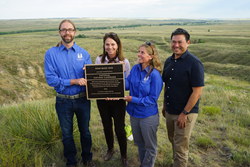 We are thrilled to take on this stewardship of Colorado's newest national landmark and believe that, through holistic management, the land, the people, and all native species including the bison, will thrive.

A ceremony to dedicate the West Bijou Site as a National Natural Landmark (NNL) took place yesterday in Strasburg, eastern Colo. Managed by the Savory Institute (SI), the 7,613 acre-site received a dedication from Jeff Orlowski, regional coordinator of the NNL program at the National Park Service (NPS). Also in attendance were Heather Eggleston, NNL program manager, Ian Miller, Denver Museum of Nature and Science and SI staff and land managers.

Designated as the 599th National Natural Landmark on Nov.17, 2016 by Secretary of the Interior, Sally Jewell, the West Bijou Site contains fossils, minerals and metals that are critical to the understanding of the timescale of Earth’s history. The Site was previously managed by the non-profit Plains Conservation Center, which recently transferred ownership to Savory Institute to utilize the state’s front range as a demonstration site and center of excellence for regenerating endangered grasslands through holistic management.

“Significant features at natural areas across the country, such as that thin band of sediments at West Bijou Site, offer extraordinary opportunities for us to learn about the natural world,” said Jeff Orlowski, regional coordinator for the National Natural Landmarks Program, NPS. “The National Park Service is pleased to partner with landmark owners, such as the Savory Institute, in support of their voluntary conservation of these important areas,” he noted.

The West Bijou Site is a nationally significant area that tells the story of an important episode in Earth’s history- the extinction of dinosaurs and the dawning of the age of mammals. This most recent of Earth's five mass extinctions, referred to as the Cretaceous-Paleogene boundary, is illustrated at West Bijou Site by a 1.18-inch band of sediments. These geologic deposits are unique because of the many methods used to constrain the position of the boundary, including pollen spores, iridium anomaly, shocked quartz, vertebrate fossils and radiometric dating. The NNL designation at West Bijou Site recognizes its incomparable contribution to the understanding of Earth's geological history through its unique features.

Governor John Hickenlooper noted, “These natural lands preserve our past, but also ensure that future generations can experience a bit of Colorado culture that can only happen when we work to protect them.”

With 50 years of hands-on grasslands management expertise, and its global strategy for grasslands regeneration through locally led and managed efforts, SI is responsible for the stewardship and long-term conservation of the West Bijou site. The ranch will become Savory’s flagship demonstration and training site for Holistic Management and will join a growing roster of demonstration sites around the world.

“We are thrilled to take on this stewardship of Colorado's newest national landmark and believe that, through holistic management, the land, the people, and all native species including the bison, will thrive,” said Daniela Ibarra-Howell, CEO and co-founder of SI.

Holistic Management, developed in the 1960’s by founder Allan Savory, provides a framework for land managers to make decisions about grazing livestock that help to restore grassland, build healthy soil, reduce the acceleration of global climate change and enhance economic, environmental, and social well-being for communities. The driving force and thought leader behind regenerative agriculture’s emergence onto the global stage, SI has influenced over 18.5 million acres of land globally through its Hubs and through strategic partnerships with The Nature Conservancy, Heifer International and HRH The Prince of Wales.

About the Savory Institute
The Savory Institute facilitates large-scale restoration of the world’s grasslands through Holistic Management. The Institute develops innovative tools and enhanced curricula, informs policy, establishes market incentives, increases public awareness, and coordinates relevant research, cultivating relationships with aligned partners. The Savory Institute is partnering with organizations worldwide to create a global network of 100 Savory Institute affiliated hubs by 2025. Additional news and information about the organization is available at http://savory.global, and Facebook.