Author Larry R. Sherman’s newly released “To Walk Away” is the latest installment in the romantic tale of Edward, a former WWII radioman on a B17 bomber, and Janice Bell.

“To Walk Away” from Christian Faith Publishing author Larry R. Sherman continues the story of Edward Koontz, a WWII veteran, and Janice Bell, the widow of a British naval Lieutenant. Written as the sequel to his previous book, “To Hide Behind a Wall,” this installment picks up right were the first left off. 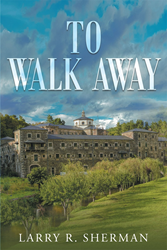 “To Walk Away”: a captivating and romantic sequel to the romantic story of a WWII radioman on a B17 bomber named Edward Koontz. “To Walk Away” is the creation of published author, Larry R. Sherman, a retired chemistry professor from the University of Scranton, who has published over two hundred manuscripts in chemistry and religion, as well as four novels.

Though the book opens in 1947, when Edward Koontz decided that he and Jancie Bell should not get married, but that Ed should return to St. Boniface, a Benedictine monastery in Belgium, Sherman notes that Ed’s love for Janice “never truly disappeared.”

Published by Christian Faith Publishing, Larry R. Sherman’s new book begins with Edward returning to the monastery to resolve the War trauma that he suffered for killing citizens during WWII.

In 1953, he takes life vows as a Benedictine lay brother. Soon, he is ordained a Deacon and shortly thereafter, a Priest, but he begins having problems with the life as a hieromonk at St. Boniface, and they only worsen as he spends more time there.

When a close friend leaves the Order, falls in love, and asks Ed to officiate at their wedding, Ed’s problems living at St. Boniface become clear. He takes an extended leave from the Order, which shows Ed that he was really neither a Benedictine nor a Catholic, and he sets out to rekindle his love with his dear Janice.

View a synopsis of “To Walk Away” on YouTube.

Consumers can purchase“To Walk Away” at traditional brick & mortar bookstores, or online at Amazon.com, Apple iTunes store, Kobo or Barnes and Noble.

For additional information or inquiries about “To Walk Away”, contact the Christian Faith Publishing media department at 866-554-0919.