A dark comedy set in Africa, where trophy hunters are experiencing exceptionally gruesome and untimely deaths, much like the big game they hunt 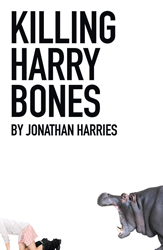 Harries has crafted a masterful story of suspense and intrigue while sharing the true story of the plight facing wildlife and refugees in Africa.

While the international law enforcement community is at a loss for who is behind these murders, Roger Storm, a man who wants nothing more than to kill his ex-boss, Harry Bones, is unwittingly drawn into what may very well become a battle to save Africa.

Readers have the opportunity to follow the adventure that takes them from Paris and London to the wilds of the Omo Valley in Ethiopia while dodging mercenaries, witnessing the sinister acts of dictators and warlords, and reeling from the dwindling wildlife population in Africa.

The book explores a topic Harries is particularly passionate about, his lifelong love of wildlife. Readers are left to decide if the punishment of Harry Bones fits the many crimes he’s committed along the way.

Readers should prepare to have a real page-turner that will be nearly impossible to put down as Harries has crafted a masterful story of suspense and intrigue while sharing the true story of the plight facing wildlife and refugees in Africa.

Harries now resides in Manhattan with his wife, though he grew up in Namibia and South Africa. It was during his childhood that he developed a genuine abhorrence for big game trophy hunting and cultivated a deep and abiding love for the wildlife of the region and beyond. A love that served as his inspiration for writing the book, Killing Harry Bones.

Harries recently retired as Chairman of a large global advertising agency. During his time in the industry, Harries traveled 9 million miles and visited 70 countries. The global circuit gave him the opportunity to visit wildlife preserves around the world. He shares his passion with his sons, one of whom became a safari guide in South Africa. His wife went on her first safari six years ago, and has been an avid fan ever since.