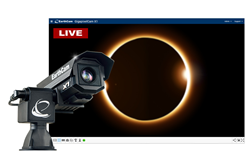 The opportunity to webcast the first solar eclipse in the U.S during our lifetime is the type of challenge that motivated our team to create new, powerful camera technology.

New York, August 18, 2017 – For the first time, EarthCam’s live webcams will follow the totality of the solar eclipse throughout the United States on August 21, 2017. From the top of the Seattle Space Needle to the streets of Times Square, viewers will enjoy the extremely rare solar eclipse on EarthCam, the world’s favorite webcam network. This coast to coast broadcast features EarthCam’s newest live streaming camera, the X1, which will utilize advanced celestial algorithms to continually correct its viewing position to stay focused on the Sun.

For viewers who cannot experience the total solar eclipse in person, EarthCam is live streaming from Nashville, TN, where the sun will be 100% obscured by the moon. A comprehensive media package, including 4K video and gigapixel photography, will be available to broadcast networks around the world. Another X1 will be stationed on the roof of the EarthCampus, EarthCam’s new world headquarters in Northern New Jersey, where viewers will experience the event at 71% obscuration.

“For over 20 years, EarthCam has pioneered innovations in the network camera industry,” said Brian Cury, CEO and Founder of EarthCam, Inc. “The opportunity to webcast the first solar eclipse in the U.S during our lifetime is the type of challenge that motivated our team to create new, powerful technology. The X1 camera system and the unique software that drives it will be made available for purchase on August 30, EarthCam’s 21st anniversary.”

The nationwide broadcast will begin in San Francisco, CA at 9:01 AM local time (12:01 EST) and continue across the continental United States, the first time such a phenomenon has been seen in 99 years. Watch for shadow bands crossing cityscapes such as Seattle, WA; St. Paul, MN; St. Louis, MO; and Washington, DC. The eclipse may have an effect on animals whose behavior relies on light cues. View the bears at ZooMontana in Billings, MT and the giraffe family at the Greenville Zoo in Greenville, SC to see if they start to behave as if it is twilight. Even where the eclipse will not reach totality, viewers can join the crowds gathering in Las Vegas, NV; Bourbon Street in New Orleans, LA and Times Square, NYC.

The best way to watch the eclipse as it occurs across the country is on EarthCam’s special event page created exclusively for this event. EarthCam is also partnering with NASA to show their entire broadcast from 12PM till 4 PM EST, live on billboards in Times Square. Over 45 webcams can also be viewed in a special playlist on EarthCamTV, available on Apple TV and Amazon Fire devices.

ABOUT EARTHCAM
EarthCam is the global leader in providing webcam content, technology and services. Founded in 1996, EarthCam provides live streaming video, time-lapse construction cameras and photography documentation for corporate and government clients in major cities around the world. EarthCam leads the industry with the highest resolution imagery available, including the world’s first outdoor gigapixel panorama camera system. This patent-pending technology delivers superior multi-billion pixel clarity for monitoring and archiving important projects and events across the globe. In 2016, EarthCam documented $225 billion of construction projects. The company is currently expanding its 10-acre campus in Northern New Jersey and maintains 13 additional offices worldwide.

Watch the eclipse occur coast to coast on www.earthcam.comLive cameras from EarthCam will stream from 45 locations across 22 states.