Dr. Lisa Mohanty has been named Dean of Trident’s University College. Dr. Mohanty, who joined Trident in 2008, is an accomplished administrator, researcher, and course developer. 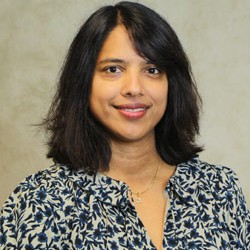 Dr. Mohanty, who joined Trident in 2008, previously served as Associate Vice President for Institutional Effectiveness and New Programs. Prior to that she was Department Chair for Student Orientation and Social Sciences in University College. Some of the other roles she has held include Associate Coordinating Professor and Program Director for General Education.

“During her time at Trident, Dr. Mohanty’s leadership and student-first approach has helped to build a culture of academic excellence,” said Dr. Mihaela Tanasescu, Provost and Chief Academic Officer. “Her commitment to Trident’s core values will help University College to see continued success in the coming years.”

In addition, Dr. Mohanty has played a key role in course development and academic administration at Trident, having served as chair of both the Curriculum Committee and General Education Committee.

Dr. Mohanty is an experienced researcher whose areas of expertise include economics, business administration, and feminist economics. In 2013, she was invited to the UN (United Nations) Women to present her paper “Race, Power, and the Subprime/Foreclosure Crisis: A Meso Analysis” and published a paper on polygyny in Feminist Economics.

Her dedication to her work and students was recognized in 2015 with an Award for Academic Excellence, presented by Trident’s Board of Trustees.