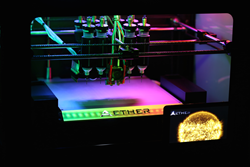 Today Aether announced that Aether and University of South Australia (“UniSA”) have begun to collaborate for a project, funded by a Bill and Melinda Gates Foundation grant, to pursue a 3D bioprinting research breakthrough in the field of contraception.

Bill & Melinda Gates Foundation, also known as the Gates Foundation, is said to be the largest transparently operated private foundation in the world. Bill and Melinda Gates, along with Trustee Warren Buffett, have donated billions of dollars to drive positive change, largely in healthcare, in the US and worldwide.

Aether CEO Ryan Franks said, “The Gates Foundation encompasses the work of the world’s two leading philanthropists, Bill Gates and Warren Buffett. Everyone at Aether is unbelievably excited to join the Gates Foundation in making a large-scale positive impact in health and medicine.”

The project will be led by UniSA’s Dr. Anton Blencowe. The latest Aether 3D bioprinter shipped to the Blencowe Research Group at UniSA to support their 3D bioprinting program and the development of screening platforms for pharmaceuticals, including models for screening contraceptives supported through the Bill and Melinda Gates Foundation.

In a statement, group leader Dr. Anton Blencowe said that “The Aether printer will complement our existing facilities and add new, unparalleled capabilities, allowing us to print more complex and intricate 3D cell constructs, enabling us to target more realistic and functional screening platforms. In particular, the Aether printer will contribute to our ongoing DAAD collaboration, and Bill and Melinda Gates Grand Challenges Project to develop 3D bioprinted screening platforms for contraceptive discovery. We are very excited to be working with the Aether Team to develop new applications for their printers, and are grateful for the team’s support and the Australian Government’s National Innovation and Science Agenda Global Connection fund for supporting this collaborative effort.”

In addition to providing Dr. Blencowe’s research team with access to the first highly upgraded new Aether 1 beta unit, Aether will support their research by providing the technical and engineering resources needed to ensure Aether 1 can allow the team at UniSA to reach their goals for the project. Aether may also create new technologies, features, and functions in order to open up new research possibilities for UniSA and the Gates Foundation.

Aether is a San Francisco technology start-up and the creator of Aether 1 Bioprinter, the world’s most advanced 3D bioprinter.

Aether 1 allows users to simultaneously print with up to 24 materials including filaments, liquids, viscous pastes and gels. Aether 1 features up to 8 different fabrication methods, and comes with 4 completely revolutionary automation features utilizing cutting-edge technologies such as computer vision.

In addition to being the world’s most advanced 3D bioprinter, Aether is far and away the most cost-effective option on the market.