WORX 20V Switchdriver 2-in-1 Drill and Driver has won a Gold award in the International Design Excellence Awards (IDEA) 2017 competition, hosted by the Industrial Designers Society of America (IDSA). The innovative Switchdriver’s rotating head enables users to change drill and driver bits with a quick twist of its dual chucks. 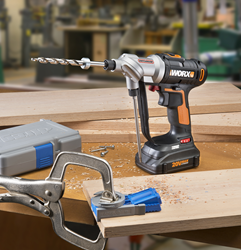 The WORX® 20V Switchdriver™ 2-in-1 Drill and Driver has won a Gold award in the International Design Excellence Awards (IDEA®) 2017, hosted by the Industrial Designers Society of America (IDSA). Switchdriver won in the Home & Bath category. (See the gallery).

Among the Top Award Winners, 25 designs won Gold and 52 designs won Silver, which were announced August 19 at the IDEA Ceremony. The event was open to the public at Rich Theater and followed by a Gala at High Museum. Both venues are part of the Woodruff Art Center, Atlanta, GA.

“It’s an honor to be recognized by IDSA,” said Jeanne White, WORX Senior Product Manager. “We believe that Switchdriver is a concept whose time has come. Our approach was to make this drill and driver smart, functional and efficient.”

Switchdriver has a rotating head equipped with two ¼-inch chucks that can be loaded with different combinations of drill or driver bits. This allows the user to drill a pilot hole, for example, and then quickly rotate the head to switch chucks and sink the screw with a driver bit. Both chucks rotate clockwise or counterclockwise with the push of a red button located above the trigger. These quick-release chucks are easy to load and accept standard hex-shaped bits, which are widely available at hardware stores and home centers. The tool has plenty of power and torque to handle a wide range of projects.

“IDSA IDEA 2017 winners demonstrate how designers are able to capture what’s invisible to others and inspire beauty through the smallest of details within the simplest of artifacts,” said IDEA 2017 Jury Chair Owen Foster, IDSA. “Winners go beyond the tangible that we are so accustomed to seeing—to cultivate amazing, holistic ecosystems.”

Founded in 1965, the nonprofit IDSA has thousands of members in dozens of Student Chapters, Professional Chapters and Special Interest Sections around the world. The Society hosts events including an annual International Design Conference, District Design Conferences and niche events. Global outreach includes designUpdate and designBytes e-newsletters; INNOVATION magazine; and the Yearbook of Design Excellence. IDSA Ambassadors support and promote industrial design with research and thought leadership such as INsights.

WORX Switchdriver holds different bits securely in separate chucks, and it's a snap to rotate from one to the other, as needed.

WORX Switchdriver has plenty of power and torque for a wide range of projects.