Stevie Awards Announce Winners of 2017 Best of the IBA Awards

Grand Stevie Award winners will be presented with trophies in Barcelona, Spain on 21 October. 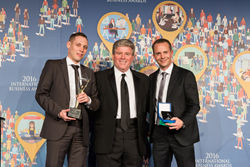 Nominees in the 2017 International Business Awards were not able to apply for the Best of the IBA Awards directly. Winners were determined by a points system based on the total number of awards won in the IBAs.

The Stevie® Awards have announced the winners of the Best of the IBA Awards in The 2017 (14th annual) International Business Awards, the world’s premier business awards competition.

Nominees in the 2017 IBAs were not able to apply for the Best of the IBA Awards directly. Winners were determined by a points system based on the total number of awards won in the IBAs with a Gold Stevie win counting for three points, a Silver Stevie for two points and a Bronze Stevie win for one-and-a-half points.

Winners of the 2017 Grand Stevie Awards are:

Most Honored Organization: With 120 award points earned by Gold, Silver and Bronze Stevie-winning entries submitted by affiliated agencies and offices around the world, the global communications consultancy MSLGROUP is the winner of the Grand Stevie Award trophy for Most Honored Organization of the year. MSLGROUP earned Stevies for the work done by offices from Canada, China, India, Japan, the USA and other nations, for clients as diverse as home improvement retailer Home Depot, Chinese electronics giant Huawei, and Indian consumer goods manufacturer Marico Ltd., among others.

Top 10: These are the top Gold, Silver and Bronze Stevie winners among all other organizations honored in the 2017 IBAs. They’ll also be presented with Grand Stevie Award trophies.

“Of all the outstanding organizations and achievements that were recognized among this year’s record-breaking number of IBA nominations, these 14 organizations stand out as the ones with the widest breadth of achievement,” said Michael Gallagher, president and founder of the Stevie Awards. “The Best of the IBA Awards are intended to honor organizations that show an especially strong dedication to honoring the work of their employees, the commitment of their clients, and a sense of innovation, and we look forward to celebrating these firms with Grand Stevie Award trophies at our gala event in Barcelona on 21 October.”

The International Business Awards feature a wide variety of categories to recognize achievement in every facet of work life, including management awards, new product awards, marketing awards, PR awards, customer service awards, website awards and more.
Gold, Silver and Bronze Stevie Award placements in the 2017 IBAs were determined by the average scores of more than 200 professionals worldwide in the three-month judging process.
For more information about The International Business Awards, including a complete list of all Stevie Award winners in the 2017 competition, visit http://www.StevieAwards.com/IBA.