Author Af Jochnick’s New Book “Napoleon, Charles XII, and Hitler” is an Account And Comparison Of The Three Major And Ultimately Unsuccessful Invasions Of Russia

“Napoleon, Charles XII, and Hitler” from Page Publishing author Af Jochnick is a comprehensive study of three failed invasions of Russia in the eighteenth, nineteenth, and twentieth centuries. This account compares the three efforts, indicates why the author thinks they were unsuccessful, and whether any force of the day could have succeeded. 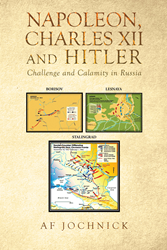 Af Jochnick, an American with dual American-Swedish citizenship who grew up in Sweden during the Second World War, graduated from Harvard Law School in 1958, and has practiced law for most of his career, has completed his new book “Napoleon, Charles XII, and Hitler: Challenge and Calamity in Russia”: an authoritative and thorough account and comparison of the three historic and calamitous invasions of Imperial and Soviet Russia.

In the last three hundred years, Russia has been invaded three times: by Charles XII of Sweden in 1707–09, by Napoleon in 1812, and by Hitler in 1941–45. None of these attempts to conquer Russia succeeded. The three campaigns deserve attention because all were exceptionally important. Had Peter the Great been defeated by Charles, his many significant and progressive reforms of Russian social, political, and religious life and great improvements of its industry and military might have been reversed. Russia’s entry as a major force in European political life would have been much delayed. Napoleon was only forty-three when he began the 1812 invasion of Russia. Had his drastic move succeeded, or had he decided to terminate the campaign against Tsar Alexander in time, before losses became excessive, the Napoleonic rule in France and many areas of Europe might have continued for a long time.
It was fairly obvious to observers at the time that the outcome of Hitler’s attack on the Soviet Union in 1941 would play a decisive role in the outcome of World War II. Nonetheless, few people would have been able to predict the immediate or long-term effects of a German victory. Would the British have agreed to a negotiated peace (a German victory might have happened before the United States was even in the war), or would they have fought on supported by their Empire and an eventual participation by the United States? And if so, who would eventually have won?

This book will seek answers to a number of questions more directly involved in the campaigns, such as: Why did the leaders make certain critical decisions? Could the campaigns have ended differently if different decisions had been made? What impact did the size and conditions of the Russian landscape and of the Russian weather have? In addition, a comparison between the three campaigns is justified: the nature of the leaders and their approach to command; how the defending commanders and armies acted; was the purpose the same in all the campaigns, or were there differences; were the campaigns equally affected by the Russian nature and weather, and many other aspects. There were similarities and differences in all areas, deserving further study. This project does not provide a complete account of the three campaigns. Instead, it concentrates on the events that required major strategic and/or tactical decisions. In relation to Germany’s June 1941 invasion, for instance, only significant events up to and through the Kursk offensive in July 1943 are covered. There is no account of events beyond that date because those events did not require any significant strategic or tactical decisions.

As a general proposition, a tremendous amount of source material is available in respect to most relevant areas of the campaigns. However, there are exceptions, especially concerning the Soviet military during World War II. The Soviet authorities were quite reluctant to provide significant and reliable information about various aspects of the Soviet military and its performance during that war. The sources upon which this work relies cannot possibly cover all important events of the three campaigns. The sources do, however, offer sufficient information to provide a picture of the events, making possible both an evaluation of the conduct of the principal actors and a comparison between the three campaigns.

Readers who wish to experience this fascinating work can purchase “Napoleon, Charles XII, and Hitler: Challenge and Calamity in Russia” at bookstores everywhere, or online at the Apple iTunes store, Amazon, Kobo, Google Play or Barnes and Noble.

About Page Publishing:
Page Publishing is a traditional New York-based full-service publishing house that handles all the intricacies involved in publishing its authors’ books, including distribution in the world’s largest retail outlets and royalty generation. Page Publishing knows that authors need to be free to create - not bogged down with logistics like eBook conversion, establishing wholesale accounts, insurance, shipping, taxes, and the like. Its roster of accomplished authors and publishing professionals can leave behind these complex and time-consuming issues, and focus on their passion: writing and creating. Learn more at http://www.pagepublishing.com.