Four Olympians qualified for the 10-member team that will represent the U.S. 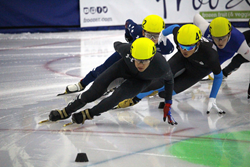 Our team is filled with international race experience, including four that have reached the biggest stage and have had success.

US Speedskating announced its 2017-18 Short Track World Cup team today following a weekend of action-packed racing at the Short Track World Cup Qualifiers at the Utah Olympic Oval. After the three-day competition - set up to replicate the race format skaters will see at U.S. Olympic Team Trials - five men and five women qualified for a spot to represent the United States in this season’s ISU Short Track Speed Skating World Cups. The first World Cup will be on September 28-31 in Budapest, Hungary.

Leading the field for the men will be three-time Olympic medalist J.R. Celski (Federal Way, Wash.) and 15-time World Cup medalist John-Henry Krueger (Pittsburgh, Pa.). Celski won four of the six individual races from the weekend and concluded the competition as the overall points leader. Krueger reached five of the six A Finals and won the men’s 1500m overall distance classification.

“I was extremely encouraged by the way our athletes raced and handled the stress from this past weekend at Qualifiers,” said Anthony Barthell, the short track national team head coach. “Our team is filled with international race experience, including four that have reached the biggest stage and have had success. Those individuals will provide valuable insights to the rest of the team as we continue to build towards PyeongChang.”

Rounding out the women’s team will be Kristen Santos (Fairfield, Conn.) and 17-year-old Maame Biney (Reston, Va.), who was the top points-getter from this weekend. Santos was a member of the 2016-17 Short Track Fall and Winter World Cup teams, while Biney skated last season in World Cup Dresden and collected a bronze medal at the World Junior Championships in Innsbruck, Austria.

Of the 10-member team, all have ISU international racing experience and nine of them raced in at least one ISU Short Track World Cup during the 2016-17 season. For a full roster with athlete’s hometowns and social media handles, click here.